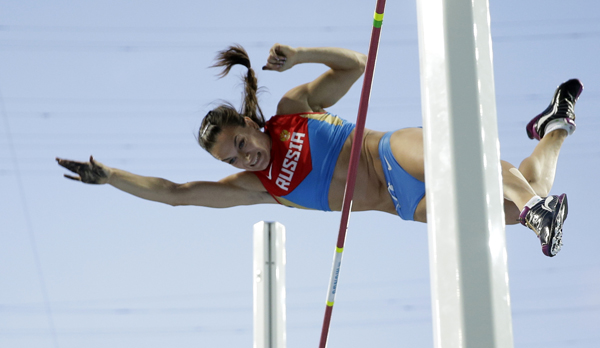 MOSCOW - Never count out Yelena Isinbayeva, especially when she is performing before a rapturous home crowd at the world championships.

Five years after her last major outdoor pole vault victory, the Russian turned back the clock with a vintage performance to beat Olympic champion Jenn Suhr with a leap of 4.89 meters (16 feet, 0.5 inches), her best outdoor effort in four years.

“I won because I was at home,” Isinbayeva said. “It was my home stadium, my home crowd.”

The fans at Luzhniki Stadium on Tuesday provided Isinbayeva with far bigger cheers than even Usain Bolt received as she beat Suhr and bronze medalist Yarisley Silva by 7 centimeters (2.75 inches).

The roar was as much amazement as encouragement.

“From the greatest, you should always expect great things. Never count them out,” Silva said. “You have to take a bow to her feats.”

When Silva missed her final attempt, Isinbayeva set off racing across the track, fists pumping the air. Suddenly, all the troubles of the past half-decade fell off her broad, muscled shoulders.

“I had many difficulties, many injuries, and so I am proud of myself that I was able to overcome all these things and be world champion today,” Isinbayeva said.

Right after clinching gold, she jumped over the advertising boards to hug Yevgeny Trofimov, the coach of her youth who returned to revive her career ahead of last year’s London Olympics.

She was still recovering from injury in London, but said “if we had the Olympics in Moscow last year, the result would be different.”

“He is a genuine coach,” she said, crediting Trofimov with her comeback victory. “He resurrected me.”

It paid off on Russia’s biggest night of the championships.

Isinbayeva even went for a world record at 5.07 meters but, as night closed in, that was too much, even for a woman who had set 28 of them, indoors and outdoors, over the past decade.

Still, at 31 she was jumping for joy like a teenager, somersaulting on the track, leaping in the arms of the mascot and hugging like never before, upstaging even Bolt and his usual showboating antics.

Now, Isinbayeva is taking time off to start a family after the season, she said, but promises she could be back, possibly for the 2016 Olympics.

“I will take a break to have a baby next year and then I will try to come back for Rio. If I am able to come back, I will be in Rio definitely,” she said.

However unlikely that would seem, few expected her to win gold in Moscow, too.

But family was a theme on Tuesday as the Eatons finished their working honeymoon in Russia, ever so close to making it a double-gold celebration.

Brianne Theisen Eaton of Canada failed to sufficiently shake off Ganna Melnichenko in the final 800-meter race of the heptathlon and finished with a silver medal two days after her husband, Ashton Eaton, won gold in the decathlon.

After two days of competition, Theisen Eaton no longer had the legs to create a decisive gap ahead of Melnichenko. And while the Ukrainian went celebrating wrapped in her national flag, Theisen Eaton wrapped herself in the warmest of embraces of her smiling husband.

One month after marriage, they proved it was a near-perfect competitive match as she gained her first global medal.

“I always watch him and watch him get his medals and think, I wonder what that feels like,” Theisen Eaton said. “Now I’m getting a little taste of it.”

Melnichenko won her first major competition with 6,586 points, compared to 6,530 for Theisen Eaton. Dafne Schippers of the Netherlands took bronze.

With the work done, the Eatons can now think about celebrating their marriage together.

“We’re contemplating on the honeymoon,” Theisen Eaton said. “Now would be the perfect time to go lay on the beach.”

The United States had to take a backseat to Russia on Tuesday but still got a huge boost when LaShawn Merritt reclaimed the world title in the men’s 400, pulling away from the pack early and winning by more than half a second. AP