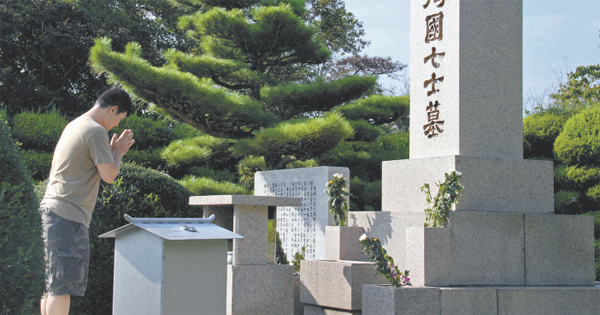 A man pays respects at a cemetery on Mount Sangane in Aichi prefecture, central Japan, where the remains of seven Class A-World War II war criminals are interred, Tuesday. By Kim Hyun-ki

The visit on Tuesday was the first time Korean media has been able to enter the obscure mountain shrine in central Japan.

Victims of Japan’s brutality as a colonial or wartime overlord get upset over the Yasukuni Shrine in downtown Tokyo, where 14 Class-A war criminals are honored, including Tojo.

Right-wing Japanese politicians and extremist organization members plan to visit the Yasukuni Shrine today and countries like Korea and China are bound to complain.

But the shrine to seven war criminals at Mount Sangane is barely recognized. All seven were hung at Tokyo’s Sugamo Prison on Dec. 23, 1948. They were cremated in Yokohama, and Gen. Douglas MacArthur ordered that their ashes be dispersed at sea.

But Shohei Sanmonji, a defense attorney for one of the criminals, scraped up some of their ashes and preserved them until they were moved to the cemetery in 1960.

Mount Sangane is around five hours southwest of Tokyo in the Aichi prefecture, and the cemetery is reached after taking a small toll road up the mountain, around 200 meters (656.2 feet) away from the highway.

A five-meter headstone marks a grave at the cemetery engraved with characters, “Junkoku-nanashi,” or “The grave of the seven patriots who died for their country.”

The back of the headstone bears smaller letters that indicate it was dedicated by former Prime Minister Nobusuke Kishi, maternal grandfather of current Prime Minister Shinzo Abe, who was also accused of being a war criminal and interred at Sugamo Prison but was later released.

The trial convicted 25 people of being Class-A criminals: 16 were sentenced to life imprisonment, two to shorter terms of imprisonment and seven were executed.

A caretaker at the cemetery said, “The ashes of the seven are buried in an urn beneath the headstone.” Even though the cemetery is located on the summit of a remote mountain, it gets a steady stream of visitors, including a group of three youths when the JoongAng Ilbo visited.

As the JoongAng Ilbo reporters made their way up the mountain Tuesday, they were followed by an unmarked car.

At the cemetery, three police officers approached them and said they had received a report of “suspicious intruders.” The officers asked, “Why did you come? Did you come to pay respect?”

They continued watching the Korean reporters from afar for at least ten minutes, the kind of suspicion and tension not found when visiting the Yasukuni Shrine.

The reporters were also carefully watched by visitors to the shrine, apparently members of right-wing organizations. They took photos of the reporters.

The cemetery has other signs of nostalgia for World War II.

One stone bears the words of Hiroshi Oshima, former ambassador to Nazi Germany at the time of World War II: “A hateful cloud closed the doors at Sugamo [prison] and the north wind blows the smell of blood. When will the seven patriots’ souls rest in peace?”