In-law could be Chun money man

In-law could be Chun money man 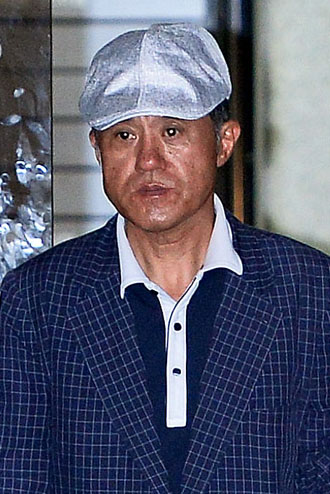 The prosecution said yesterday that it has secured documented evidence that the brother-in-law of former President Chun Doo Hwan transferred assets to the former strongman’s children in a carefully calculated scheme.

The prosecution said it will seek a warrant to detain Lee Chang-seok, the suspected money manager for the Chun family, on charges of tax evasion as the investigation moves forward.

According to prosecution sources, the special team at the Seoul Central District Prosecutors’ Office assigned to the case has concluded that Lee passed some of his assets along to the former dictator’s children mid-2000.

The move happened to coincide with growing public criticism of Chun’s continuing failure to finish paying off a massive corruption fine.

The prosecution has confiscated Lee’s asset management plans in raids. The sources say the seized records show he financed a massive development project for Chun’s second son, Jae-young, and detail other financial dealings with Chun’s children. The prosecution also confirmed that the transactions actually took place by tracing their bank accounts.

Prosecutors suspect that Lee passed fortunes down to the Chun children by disguising the sums as legitimate investments and real estate transactions.

They also confirmed that since the 1980s, Lee managed bearer bonds worth tens of billions of won for the family, along with a large amount of cash, through forged-name bank accounts. The assets were believed to be a significant part of Chun’s slush funds.

After launching a probe to uncover Chun’s squirreled-away wealth, a special team at the Seoul prosecution office questioned Lee, the younger brother of Chun’s wife, Lee Soon-ja, for 15 hours on Monday. During the grilling, Lee admitted that he had consulted with the family and handed over assets to his niece and nephews, but denied that he was the former president’s money manager.

“The money Chun gave me was mixed into my assets, but I mostly inherited my fortune from my father,” Lee was quoted as saying. “I helped my nephews and niece and sister with that money.”

Lee Kyu-dong, now deceased, is Chun’s father-in-law. The former Army general managed the assets for the ex-president for decades.

The prosecution originally planned to seek a detention warrant against Lee Chang-seok yesterday, but decided to investigate further in order to more clearly prove the relationship between Lee’s alleged management of Chun’s slush funds and the assets he handed over to Chun’s children.

In addition to the goal of uncovering assets Chun has stashed away and collecting on his outstanding fine of 167.2 billion won ($150.12 million), prosecutors are also investigating the Chun family and associates for possible legal violations in hiding money.

Chun came to power in 1980 through a military coup and ruled the country until 1988. In 1997, the Supreme Court convicted him of accepting massive bribes and running slush funds during his presidency, ordering him to pay 220.5 billion won in fines.

Prosecutors also arrested Chun’s nephew, Lee Jae-hong, on Tuesday following their raids at his home and offices. Lee was the first relative of Chun to be taken into custody since the probe was launched. The prosecution appeared to have made the decision to arrest him without a warrant on Tuesday due to concerns that he would destroy evidence.

Another man also suspected of managing Chun family assets was also arrested yesterday. Prosecutors have until noon today to question the suspects. If necessary, they will seek warrants to further detain them.

Lee, a son of Chun’s elder sister, is suspected of laundering the former president’s slush funds using a landscaping company that he operates.

The company moved its headquarters on Sunday from the building in southern Seoul that it had occupied for 17 years, and prosecutors believe the sudden relocation was due to the investigation.

Despite its more than 100 billion won in annual sales, the firm is registered as a privately owned company, not a public corporation.

According to the prosecution, Lee is also suspected of doing real estate deals for the Chun family. He was suspected of purchasing land in Handam-dong, Seoul, with Chun’s money in the early 1990s.

He sold the property in 2011 for 6 billion won, and prosecutors believe that some of the money went to Chun.