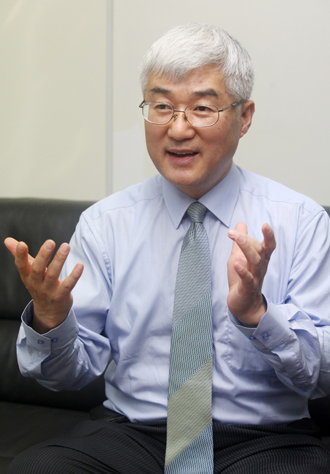 Ma Young-sam, the ambassador for public diplomacy at the Foreign Ministry, is on a mission to make every Korean person a walking advertisement for the country to help “capture the heart of the world.”

“Public diplomacy stems from the idea that through culture, arts and sports we can directly deal with the general public of another country,” Ma told the JoongAng Ilbo in an interview last week in his office.

This is “different from traditional diplomacy, which the government conducts through dialogue and negotiation process,” said Ma.

“As a country whose economy is highly dependent on foreign countries, Korea’s national image is all the more important,” said Ma. “With the dangers of the ‘Korea discount’ as a divided country, along with North Korea’s development of its nuclear program, South Korea has to more diligently show that it is an attractive and friendly country.”

On July 17, the Ministry of Foreign Affairs launched the Center for Public Diplomacy in a bid to promote diplomacy that “anyone can participate in.”

Public diplomacy is the global trend. Following the terrorist attacks on Sept. 11, 2001, the United States tried to counter anti-American sentiment while China, through its economic advancement, has also tried to bolster its image. In a summit in Beijing in June, President Park Geun-hye agreed to a joint Korea-China public diplomacy forum.

Ma, a career diplomat for 33 years, previously served as ambassador to Israel and director-general of the African and Middle Eastern Affairs Bureau, prior to being appointed as Korea’s first public diplomacy ambassador. While Korea’s entry into public diplomacy has been slow, the country’s appeal abroad has gradually expanded through the Korean Wave, fueled by dramas, movies and K-Pop. Dark horse on YouTube, Psy, also made dramatic inroads on this front.

When Ma visited Africa recently, local students showed him their cell phones, which were Korean-made, and added that their laptops also were Korean. A student told him, “My dream is to save up and buy a Korean car.”

He also thinks diplomacy begins at home. “Foreigners in Korea are very important messengers. Through social networking services or the Internet, they are connected to their families and friends in real time. Public diplomacy is conveying our friendship to these people and spreading awareness of Korea. And when we travel abroad, we need to keep from acting in any way that may raise eyebrows.”