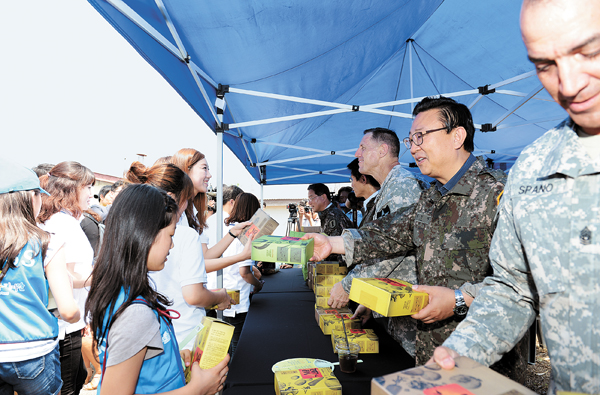 PAJU, Gyeonggi - Having sat vacant for nine years, Camp Greaves, a former U.S. army compound just over 3 kilometers (2 miles) from the DMZ, is set to be brought back to life as a military experience zone next month.

The facility, built in Paju during the 1950-53 Korean War, has gone unused since the unit based there was deployed to Iraq in August 2004, leaving behind hundreds of barracks and offices, a gymnasium, a food court, a church and a canteen.

When ownership of the base was transferred to Korea in 2007, the government and residents spent years trying to figure out what to do with it.

The government wanted it to go to the Korean Army, but Paju residents felt it should become a recreational complex. In the end, the locals won.

The military experience program is part of a massive government project to turn the entire camp into a sprawling eco-resort by 2017.

Of the 22.5 hectares (56 acres) of land, 12 hectares will be reserved for the military experience camp. Later, the rest will offer a wide range of activities related to security and the DMZ’s ecosystem, offering a glimpse into what it’s like to face North Korea across one of the most militarized borders in the world.

“Along with the military-related programs, we will provide a comprehensive tour program that takes people to underground tunnels and the Dora Observatory,” said Song Jong-seok, a Paju city official.

The main four-story building, which measures 3,325 square meters (35,790 square feet) and used to be used as accommodations for American soldiers, will house program participants. It can hold some 120 people.

The Korean Army will help run the army-life program and the U.S. Army will provide historical records.

“Now, a number of foreigners visit the DMZ and adjacent areas. So we expect the facility to be able to appeal to foreigners as well,” said Song.

The city office expects student groups from local middle and high schools to be the primary camp participants.

The facility is on a hill overlooking the north bank of the Imjin River. The 1st Marine Division pitched tents there during the Korean War in 1953.

When the fighting stopped, Marines used the camp as a base to patrol the DMZ.