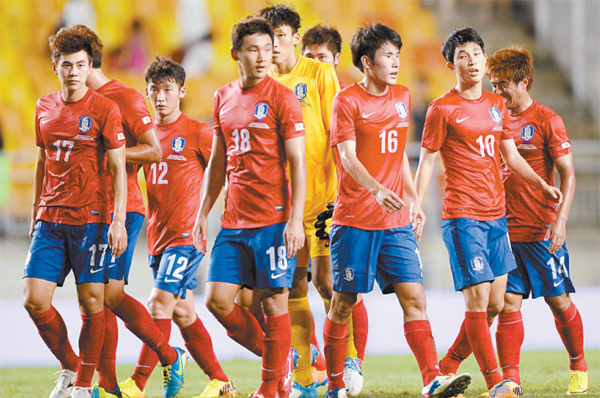 Members of Korea’s national football team walk off the pitch after holding 22nd-ranked Peru to a scoreless draw in a friendly match at Suwon World Cup Stadium, Wednesday. [NEWS1]

The competition to stay on Hong Myung-bo’s squad is getting fiercer, as the coach expressed satisfaction with a draw against Peru on Wednesday by his second team, sans Europe-based players.

Korea’s national football team held the 22nd-ranked Sergio Markarian side to a scoreless draw after it enjoyed a majority of possession in a friendly in Suwon on Wednesday.

Composed of players from the K-League and J-League, Hong’s squad was unable to hand the former Olympic coach his first victory, repeating its inability to close out games during the East Asian Cup last month. But the team put up a solid wall, in particular in the midfield and backline, against a South American powerhouse, making it a no-sure bet for Europe-based players to get a spot on the national squad.

Hong, who had said he will call up Europe-based players beginning next month, is leaving for Germany today to see three Koreans in Bundesliga ? Son Heung-min of Bayer Leverkusen, Koo Ja-cheol of Vfl Wolfsburg and Park Joo-ho of FSV Mainz 05.

Two tune-up matches are scheduled next month, on Sept. 6 and 10. Korea will play against Croatia on Sept. 10 while it is searching for an alternative opponent for the Sept. 6 match after Iran canceled it.

After the two friendlies next month, Hong will leave for England, where he will check the conditions of Park Chu-young of Arsenal, Ki Sung-yueng of Swansea City, Ji Dong-won of Sunderland, Kim Bo-kyung of Cardiff City, Yun Suk-young of Queens Park Rangers and Lee Chung-yong of the Bolton Wanderers.

Korea is planning to have four more buildup matches later this year - two in October and two in November.

Hong is scheduled to summon his third squad on Sept. 2, and it will have more international players as he zeroes in on the next World Cup, where he will lead Korea’s eighth successive appearance. But, who will make up the team is hard to predict due to better-than-expected performances of Asia-based players.

In the midfield, Ha Dae-sung of FC Seoul and Lee Myung-joo of Pohang Steelers put pressure on Peru, allowing few counterattacks from the fully-equipped La Blanquirroja, led by overseas stars such as captain Claudio Pizarro of Bayern Munich, Paolo Guerrero, of Corinthians, and Jefferson Farfan, a striker for Schalke 04.

In the backline, Kim Jin-su and Kim Min-woo played well at left fullback. Kim Chang-soo and Lee Young managed to keep at bay penetration through the right back.

Hong Jeong-ho was named as the player of the game as he safeguarded center-back alongside Jang Hyun-soo and Hwang Seok-ho. Under Hong’s leadership, Korea surrendered two goals in four games, all to Japan, during Korea’s final match of the East Asian Cup.

The offense led by Kim Dong-sub of Seongnam Chunma was not as productive, leading Hong to become the first Korea coach since 2000 not to win in his first four games. But Hong refused to blame the lack of wins on the lack of ability of his players.

“Our offense slowed in the second half and that is because of dwindling stamina of the players,” Hong said after the Peru match. Korea dominated Peru in shots with 15 to 6. Peru was limited to only a shot in the first half.

“I think our problem is with the physical endurance rather than their ability,” Hong said.

Hong said that he will also try to improve teamwork.