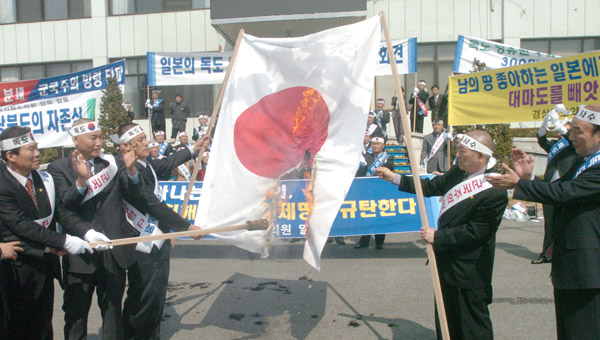 Maybe Japanese officials gave themselves a pat on the back several years ago when they came up with a clever plan of attack in the territorial dispute over Dokdo, the small group of islets the Japanese call Takeshima. They evidently thought they should pick a fight with Korea and claim Dokdo as their own. Even though their claim lacked legitimacy, it gave the Japanese an opportunity to present a “solution” to the dispute that Korea could never accept - why not take the controversy to the International Court of Justice? Korea would never agree, and therefore it would make Japan look like a peaceful country that respects the rule of the law and is a victim. It would help make the world forget that Japan was the country that caused the Pacific War.

The scenario worked to some extent. South Korea vehemently refused to go along with Japan’s proposal to take the territorial dispute to an international arbitration court. Korea also declined to engage with Japan or make further public statements on the sovereignty issue, deeming the territory legitimately Korea’s. But Japan’s calculation ended there, and eventually it will have to come up with some good answers for the inconsistencies in its territorial disputes.

First of all, Japan has been making inconsistent statements about the islets. The Japanese first claimed Takeshima was historically theirs, but then said the islands were incorporated into modern-day Shimane Prefecture in 1905.

Secondly, Japan must explain why it has singled out Dokdo, out of all its territorial disputes, to appeal to the international court. Is it because South Korea has no judge sitting on the bench of the Hague-based court? South Korea maintains that the dispute over Dokdo cannot be fought in a court because there are neither bilateral agreements on the islets, nor international laws that the world court could use to make judgment. It does not make sense for Japan to argue that Dokdo is a subject of legitimate legal dispute while maintaining its claims over the islands of Senkaku, or Diaoyu in Chinese, cannot be a matter of dispute.

Lastly, Japan has repeatedly neglected its obligation to atone for war crimes it committed during the pre-1945 era, including the imperialist military’s conscription of women, mostly from Korea, to become sex slaves for Japanese soldiers. It continues to anger neighboring countries when top government officials and politicians visit Yasukuni Shrine, which honors Japan’s war dead, including Class-A war criminals. The world already sees the real face of Japan and is beginning to re-evaluate various Japanese issues in a new light. Many people see the arrogant and shameless way Japan has treated the comfort women and Yasukuni Shrine issues, causing them to reassess their support for Japan on territorial issues.

Since World War II, the global community has been obliged to settle its conflicts and disputes peacefully. Japan has shrewdly abused this fact to argue for a “peaceful” settlement of the Dokdo issue in international court. But what Japan is doing - invoking a dispute and demanding it be solved on its terms - is by no means peaceful.

A mature member of the international community should be able to respect the rights of others. What’s more important than shouting the empty words “peaceful settlement” is not stirring up unnecessary conflict in the first place. If a country wants to claim another state has infringed on its interests and rights, it should first study to see whether its reasoning makes sense, then demonstrate consistency in its reasoning. Japan has done neither.

If Japan sincerely believes its unilateral incorporation of Dokdo as a part of Shimane Prefecture in 1905 was legitimate and has no association with its imperialist and colonial past, it should join in forming an international committee to review the issue objectively. Politicians and scholars from around the Asia-Pacific region could form a committee and study whether the incorporation of Dokdo into Japanese territory came from the Japanese imperialist authorities.

But the best and most peaceful way to solve the long-standing issue would be for Japan to grow out of its imperialist past and realize it is now part of the community of Asia. It must get off its high horse, stand next to its neighbors and work cooperatively. Otherwise, Japan’s calls for peace are nothing more than hypocritical maneuvering.

* The author is the former ambassador to Nepal.