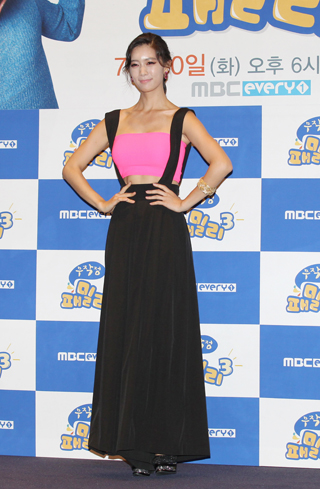 Actress Clara, of the SBS drama “Goddess of Marriage,” said she would like to have a child with the comedian Sam Hammington, who has been gaining popularity after appearing on MBC’s entertainment show “Real Men.”

On “Difficult Show,” which aired on cable channel QTV on Wednesday, six hosts, including comedians Jung Hyung-don and Sam Hammington, asked Clara to rank them after asking her various questions.

Clara was asked to answer who she would want to have a child with if the only surviving people on Earth were the six members of the show.

“Because he is a foreigner and cute-looking, I think the child would come out pretty,” said Clara, making Hammington her first choice.

Jung was put at the bottom of the list because Clara said he looked lazy.