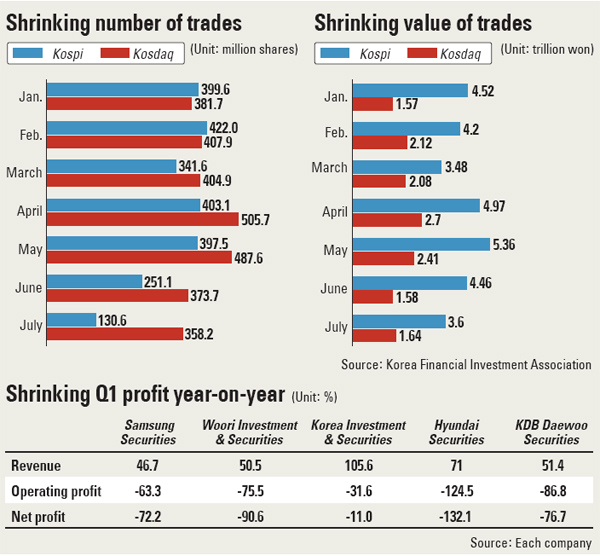 Brokerage firms in Korea saw their earnings tumble in the first quarter of the 2013 fiscal year, falling far below market expectations mainly due to rising bond yields and shrinking stock trading commissions.

They are not alone - KDB Daewoo Securities announced on Tuesday its operating profit shrank 87 percent while its net profit declined 77 percent over the same period.

The operating profit of Korea Investment and Securities fell 32 percent.

Though brokerage firms’ latest business performance was largely disappointing and shocking at the same time, the fall in earnings was somewhat expected.

Since May, bond yields have been rising rapidly, which brought down bond prices.

Local brokerage firms in recent years have expanded their bond ownership when yields were low. But with an increase in yields amid concerns that the United States Federal Reserve could begin to taper its quantitative easing measures as soon as the middle of September, the profit value of bonds held by the brokerage firms has plummeted.

“The volume of stock trading [in the first quarter] fell, which led to a drop in the amount of total stock transactions,” said an official from Hyundai Securities. “But more than that, with the rising yields due to concerns over the United States walking away from its quantitative easing measures, bond valuations fell.”

As of end of May, the balance of bonds secured by 62 local brokerage firms was 1,334.9 trillion won, which is more than 50 percent of their total assets.

The volume of bonds held by five major securities firms was about 10 trillion won ($8.9 billion), which affected their earnings even more.

“When yields go up 0.5 percent, the amount of loss per 10 trillion won worth of bond holdings will exceed 15 billion won,” said Jeon Bae-seung, a researcher at Shinyoung Securities.

Concerns are rising as market conditions for brokerage firms are expected to remain grim, with little hope for improvement.

The total amount of stock trading fell from 6.7 trillion won in January to 3.6 trillion won last month. The number of stock transactions also declined from 469 million to 130 million over the same period.

Considering that the main source of profit for brokerage companies is commissions from stock trading, it is inevitable that their profits would reflect a parallel decline.

“Volatility in the global financial market is expanding,” said Park Jin-hyung, a researcher at IBK Securities. “The domestic economy is also struggling to find new growth engines and individual’s disposable income has also been tied up, leaving little room for improvement in market conditions.”

Amid difficult times, brokerage firms have chosen to voluntarily tighten their belts by undergoing restructuring and cost-cutting.

“There was manpower restructuring recently following the closing down of branches,” said an employee from a securities firm. “I haven’t even taken summer vacation yet out of concern.”