Despite lack of tour wins, Wie heads to Solheim Cup

Despite lack of tour wins, Wie heads to Solheim Cup 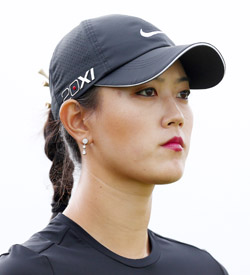 PARKER, Colorado - Michelle Wie hasn’t won a tournament in three years. She didn’t come close to earning a spot on the Solheim Cup. Being a captain’s pick for the second time on the last three American teams stood out even more this year because one of the players left out won on the LPGA Tour this year.

This would seem to be a good time to do whatever she can to blend in at Colorado Golf Club.

Except for the socks.

Wie added her own touch to the U.S. uniform of a khaki skirt, red shirt and a blue cap. She showed up on the practice range with knee-high socks of red-and-white stripes capped off by a thick blue stripe with white stars.

“It’s a bit patriotic,” Wie said Wednesday. “I just kind of accumulate things over the year. I see things and I’m like, ‘Oh, that would be great for Solheim Cup.’ And I just brought them out.”

It’s far more important that she bring out her very best game as the Americans try to stay perfect on home soil and win back the Solheim Cup from Europe.

U.S. captain Meg Mallon met with Wie at St. Andrews after the Women’s British Open to tell her she was on the team. The next thing she told Wie - after the 23-year-old from Hawaii stopped crying - was to not think of herself as a wild-card selection, but one of 12.

“It’s tough being a captain’s pick,” Mallon said. “There’s a lot of pressure that players put on themselves being a pick.”

Then again, that’s a big reason why she took Wie.

Few other golfers have received so much attention for winning so little. Wie first was recognized in golfing circles when she was 12 and blasted 270-yard tee shots during a pro-junior event at the Sony Open alongside PGA Tour players. Scrutiny followed a short time later, and it has been relentless.

Wie, who graduated last year from Stanford with a degree in communications, quit reading long ago. And despite facing criticism at such a young age, she has shown remarkable maturity in not fighting back. The high road comes naturally.

“It’s just the way my parents raised me,” she said.