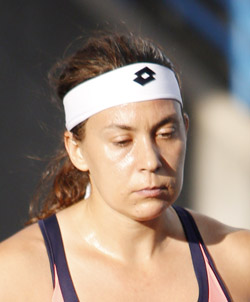 MASON, Ohio - With her body aching after another loss, Wimbledon champion Marion Bartoli decided to retire Wednesday night, saying she could no longer deal with the continuous pain on the court.

Her tearful announcement at the Western & Southern Open came less than two months after she pushed through the pain to win her greatest championship on Wimbledon’s chewed-up grass.

“My body was really starting to fall apart and I was able to keep it together, go through the pain - with a lot of pain - throughout this Wimbledon and make it happen,” the 28-year-old French player said, tears running down her cheeks. “That was probably the last little bit of something that was left inside me.

“I’ve been playing for a long, long, long time, and it’s time for me now.”

She was seeded 15th when she beat Sabine Lisicki for the title at the All England Club, ending the match with an ace. She climbed into the stands to hug her father, Walter, a doctor who drove her 100 miles or so to tournaments in France when she was in middle school.

After another painful time on court during a 3-6, 6-4, 6-1 loss to Simona Halep on Wednesday night, she called her father and came to her decision.

“I have pain everywhere after 45 minutes or an hour of play,” she said. “I’ve been doing this for so long. And yeah, it’s just body-wise, I can’t do it anymore.”

Bartoli has been hampered by an injured left foot, right ankle, right hamstring and Achilles tendon injury. She said every part of her body hurt while she was playing Wednesday, and it’s been like that for some time.

She reached a career-high ranking of No. 7 at the start of the 2012 season, but a Grand Slam title eluded her. Bartoli finally won at Wimbledon in her 47th Grand Slam tournament, the most by any woman before winning one. After that title, her ranking moved back to No. 7.