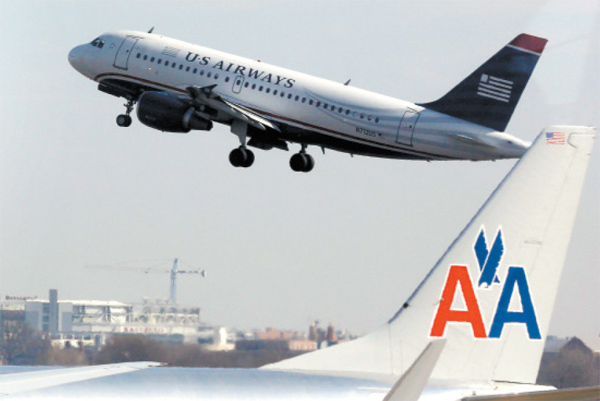 A US Airways jet passes American Airlines planes on takeoff from Reagan National Airport near Washington in this file photo from Feb. 25. [REUTERS/NEWS1]

The merger between American Airlines and US Airways was supposed to cap an era of consolidation that helped the airline industry return to profitability and produce a stronger competitor for giants United and Delta.

Now a government lawsuit to block the merger has put both of those expectations in doubt.

If American cannot grow by merging, it could decide to add flights to better compete with larger rivals. Doing so would likely reduce airfares - and profit margins - across the industry, an outcome many airline investors fear. Airline stocks sank for a second straight day Wednesday.

American has faded to a distant third in the United States and is particularly weak along the U.S. East Coast. US Airways is No. 5 among U.S. carriers, lacks strength in the middle of the country and doesn’t even fly to Asia. But put them together under the American Airlines name, and you’ve got the biggest airline in the world.

Size helps airlines land important corporate-travel accounts - business passengers will pay higher fares for a carrier that gets them where they want to go.

That’s why American and US Airways are vowing to fight the U.S. Justice Department’s lawsuit to block their merger.

Airline profits have improved in recent years as mergers eliminated several major airlines and the survivors limited the supply of airplane seats, driving up fares. Many analysts think that if American remains independent, it will pursue a rapid-growth strategy - that was CEO Tom Horton’s plan before the merger. Wall Street didn’t like it.

If American tries to grow to catch up to United and Delta, “the industry’s longer-term earnings prospects are jeopardized,’’ J.P. Morgan analyst Jamie Baker wrote in a note to clients. Fitch Ratings said the government’s move against the merger could mean the end of airline consolidation, making the lawsuit a negative for the industry’s credit ratings.

American’s parent, AMR Corp., and US Airways Group Inc. announced their merger in February and AMR made the deal part of its reorganization plan that a federal bankruptcy judge was expected to approve on Thursday. The plan would have allowed AMR to end nearly two years in bankruptcy.

But on Tuesday, the Justice Department and six states sued to block the deal, saying it would hurt competition and drive up prices for consumers. On a conference call with reporters Wednesday, lawyers for the airlines said they were confident of winning when the case goes to trial. They said that the government has only stopped one merger in the last eight years.

“We were surprised that the [lawsuit] wasn’t stronger,’’ said one of the lawyers, Paul Denis. “We usually expect the government to put on a better case.’’

“We allege that the deal will lessen competition, and passengers will pay higher fares and receive less service,’’ she said.

If the airlines win, the lawsuit will be just a speed bump in the merger plan. Or they could negotiate a settlement with the Justice Department - maybe by giving up coveted takeoff and landing slots at crowded Reagan National Airport outside Washington, D.C.

But if the merger gets scuttled, American and US Airways will remain far behind United and Delta - which grew through regulator-approved mergers in the last five years - and without any way to grow quickly.

“US Airways by itself doesn’t have the money to go out and create trans-Pacific routes,’’ said Robert Mittelstaedt, dean emeritus of the business school at Arizona State University and a longtime observer of the airline industry.

Executives for American and US Airways have declined to say yet what they would do if the merger is blocked. AMR would have to file a new reorganization plan with the bankruptcy court, because the merger is the key element of its current plan. It would then have to get its creditors, who were instrumental in steering American toward a merger, to support the changes. The creditors expected to be fully repaid under the merger plan but might get less if American remains on its own.

If AMR must go ahead without the merger, it can point to improving financial results. It has cut labor and other costs in bankruptcy, and it posted a $220 million profit in the second quarter, its first profit for the period in six years. An important measure of performance, revenue per mile, hit a record in July.

The merged airline would be run by US Airways CEO Doug Parker. Several top executives at American (and some at US Airways) were not offered jobs at the new company and had planned to leave.

Some departing American managers might have to pull their resumes off job Web sites, but they haven’t left yet - they are due to get severance deals if they stay until the merger is completed.