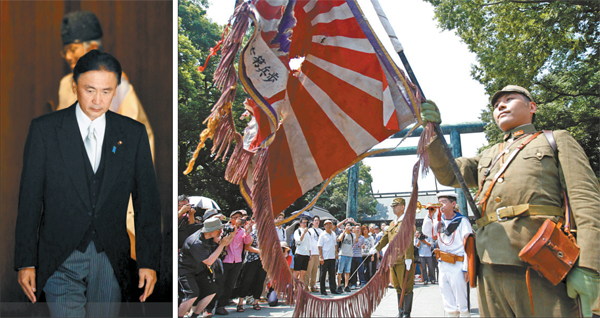 TOKYO - In his memorial address to mark the 68th anniversary of Japan’s surrender after World War II, Prime Minister Shinzo Abe broke a tradition set by his predecessors by failing to mention the damage the country inflicted on its wartime victims yesterday.

Since Prime Minister Morihiro Hosokawa in 1993, Japanese leaders have always mentioned their regret for the abuse wrought on Asian nations in their speeches on the same day that Korea celebrates Liberation Day.

At the memorial service at the Nippon Budokan in Tokyo attended by Emperor Akihito, government officials and family members of war dead, Abe paid tribute to those who had died and mentioned other nations only when referring to postwar aid Japan gave.

He also failed to pledge Japan’s renunciation of war, which has also been the norm with his predecessors. Abe himself, in his speech as prime minister in 2007, offered “deep remorse” and expressed “heartfelt condolences” to the Asian countries that Japan caused “considerable damage and suffering” to.

Abe, who had previously expressed regret for not visiting the Yasukuni Shrine in his first term as prime minster from 2006 to 2007, avoided the controversial memorial yesterday in apparent deference to Seoul, Beijing and other Asian nations that suffered under Japan.

Abe did, however, send a ritual offering to the shrine under his name through an aide, Koichi Hagiuda, who is a senior ruling Liberal Democratic Party official.

And at least three Japanese cabinet members and some 100 parliament members paid their respects at the shrine, spurring strong protests from Seoul and Beijing.

Korea and China have long criticized visits to the Yasukuni Shrine, as it honors Class-A war criminals and seems to glorify the country’s imperial past.

In response to the Yasukuni visit, Cho Tai-young, Korean Foreign Ministry spokesman, said in a statement yesterday, “It is very deplorable that Japanese leaders and some cabinet members on the occasion of Aug. 15 again paid their respects at the Yasukuni Shrine, which glorifies wartime aggression, despite Korea and the international community expressing repeated serious concern, showing they continue to shut their eyes to history.”

He urged Japan to “look squarely at past history with courage, and through true repentance build trust with neighboring countries.”

Chinese Foreign Ministry spokesman Hong Lei said that the visits of Japanese political leaders to Yasukuni are an “intrinsic attempt to deny and glorify the history of invasion by the Japanese military.”

He said the Japanese should “honor their commitment to admitting and reflecting upon their history of invasion.”

In April, cabinet members including Finance Minister and Deputy Prime Minister Taro Aso, along with some 170 parliament members, visited the shrine for a spring festival, drawing a backlash from Seoul and Beijing.