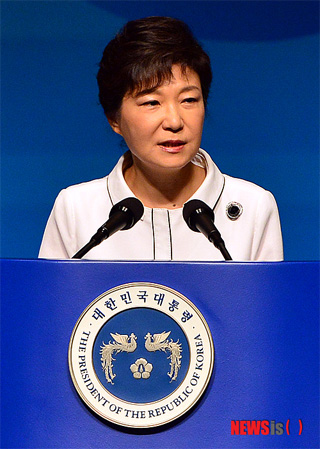 The Great Journey of the Republic of Korea

Though there have been many ups and downs since liberation and the founding of the nation, there has been no interruption in our history. Today, Korea has become a proud country that is as competent as any other.

Some 100 years ago, we lost our country and were on the verge of ceasing to exist. Despite that, our national spirit and energy were never lost and our forefathers, many of whom gave their lives for the country, continued to struggle for independence. That great spirit and noble cause eventually brought us the much longed for liberation 68 years ago today.

The Government will go all out to honor the lofty cause of our patriotic ancestors who dedicated themselves to the nation’s independence. In addition, it will preserve and manage relevant historic sites and records. By doing so, it will see to it that their cause will be raised up for future generations to hold in esteem.

Sixty-five years ago today, the Republic of Korea was founded in spite of challenges posed by foreign powers and the chaotic situation in and outside the country. When the Republic was launched, the stipulation of liberal democracy in the Constitution as a core value to be aimed at was the first step on the path toward today’s prosperity and that of the future.

On the heels of nation building, we were plagued with the wounds of war and poverty. Even though we had no technology, no capital and no resources, we never got discouraged. Rising with determination and a can-do spirit, Koreans wrote new chapters in history of miracles wrought with blood and sweat against all odds in the mines of Germany, on the searing deserts of the Middle East and in the jungles of Vietnam.

Thanks to hard work, nothing could stop us from making progress even during the oil shock in the 1970s, during the foreign exchange crisis in 1997 and during the global financial crisis in 2008. In just two generations, Korea has grown into the eighth largest trading nation and a top-class IT powerhouse.

Our beautiful and unique culture has spread widely by means of Hallyu and has served as a catalyst for connecting with people around the world and promoting mutual understanding. Korea has now become a contributor to world peace by sending peacekeeping contingents to many parts of the globe.

The miracle of the Republic of Korea is the glorious achievement that all our people have accomplished together. It has truly been a great journey. I am convinced that the potential of our people, who have carved out a proud history with the indomitable determination and the spirit of meeting challenges head-on, will help write another chapter of miracles in history.

We will all travel together on that great journey.

It is my belief that genuine liberation and nation building will be complete when peace is realized on the Korean Peninsula, and South Korea and North Korea are reunified as one.

The four administrative priorities—economic revitalization, happiness for the people, cultural enrichment and the foundation for peaceful unification—and many other policy tasks should be successfully carried out. I am certain that it will be the way to lay the cornerstone for unification.

The past six months have been spent devising the framework for running state affairs.

From now on, my Administration will work to shape a new Republic of Korea through the concrete implementation of plans and the ensuing results. It will embark on new changes and take up new challenges to help establish a principled country by normalizing the past abnormal. It will create a rich society where every single person can enjoy a decent life and cultural opportunities without anxieties, and make a better nation blessed with jobs and economic vitality.

In the days to come, the Government will do its utmost to make sure that constitutional values and law and order are respected in our society. To this end, irregular and corruptive practices that have continued from the past will be rectified so that they will no longer recur. In the process, we will endeavor to make a government that is clean and transparent and build an upright society.

On top of this, we will make efforts to create a level playing field for every economic player and ensure that individual abilities come before academic achievements, thus laying the groundwork for a trust-based society. By improving the lives of the people and building a strong and prosperous nation, we will embark upon our journey toward the goal of building an advanced nation in name and substance.

The Government has so far upgraded laws and institutions for economic revitalization and established a framework for sustainable economic growth. Policy capacities will be more intensively channeled into restoring economic dynamism and creating job opportunities.

Even though we are undergoing tough times, I urge all my fellow citizens to place confidence in the Administration so that we will be able to come together to overcome difficulties. As an old saying goes “Many hands make light work,” I hope all of us will be able to pull together especially in times of difficulty so that united efforts will create synergy.

The new Administration will create a dynamic economic ecosystem where, under a principled market economy, big conglomerates and SMEs can realize common progress, and venture businesses equipped with creativity and passion can be founded continuously.

Redoubling my efforts as President for sales diplomacy, I will also do my part to help local businesses enlarge our economic territory on the global stage and provide support for their endeavors.

The Republic of Korea has so far successfully turned a series of crises and challenges into opportunity on the strength of the united efforts of the people. Let us all join forces once again for yet another leap forward of the economy.

This year marks the 68th year of the division of Korea. Now is high time to usher in a new era of peace and reunification on the Korean Peninsula going beyond the era of distrust and confrontation between the two Koreas.

If the North abandons its nuclear programs and becomes a responsible member of the international community, it would be possible to open a new era on the Korean Peninsula. This would also help address hardships and difficulties facing the North Korean people.

We can no longer turn a blind eye to hunger and other difficulties facing people on the other side of the Peninsula. Regardless of the political situation, the new Administration will continue its humanitarian assistance and exchanges. What matters the most, however, is changes on the part of the North and their behavior. We are sincerely looking forward to such changes in the North and are ready to redouble our efforts to help it with an open mind.

Yesterday, after a 133-day stoppage, the two Koreas came to an agreement on the internationalization of the Kaesong Industrial Park and the prevention of any recurrence of the shutdown. I hope the agreement this time will serve as an opportunity to remedy what went wrong in inter-Korean relations in the past and help build a new relationship of mutual prosperity.

Through the trust-building process on the Korean Peninsula, I hope that peace will take firm root and that the two Koreas will be able to realize common progress.

First and foremost, we have to ease the pains of separated families. I hope the North will be able to work together to make the reunion of the separated families possible around the time of the upcoming Chuseok holidays.

In addition, I propose to the North the creation of an international peace park at the Demilitarized Zone, which is a legacy of division and confrontation between the two Koreas. By turning the DMZ into a peace zone, I hope that our memories of war and threats of provocations that linger in our minds will be removed and that efforts to make the Korean Peninsula a land of trust, harmony and collaboration will be newly made.

Safeguarding peace requires deterrence. Building peace requires a foundation of mutual trust. Even if it takes some time, the trust-building process on the Korean Peninsula will be steadily pursued as our means to establish South-North relations that accord with common sense and international norms and to carve out true peace and trust.

Japan is an important neighbor and key partner in the work of bringing peace and prosperity to Northeast Asia. Yet the recent situation surrounding historical issues has cast a dark shadow on the future of our two countries. In the absence of courage enough to face the past and determination enough to care for another’s pain, it will be difficult to build the trust necessary for our future.

I believe that the great majority of the Japanese people desire to see our two countries stand together to achieve peace and prosperity in Northeast Asia. The basis of trust between the people of Korea and Japan is already considerably broad, and closer relationships are developing as Koreans and Japanese, especially young people, engage with one another and share their love for not only Hallyu but also other parts of their respective cultures.

If politics cannot follow the heart of its people and instead returns to the past, a brighter future will never come. In accordance with the wishes of both the Korean and the Japanese people and in order that we may become true partners in cooperation, it is time for the political leaders of Japan to show us a leadership of courage that seeks to bring healing for the wounds of the past.

Yi Am, a great scholar of the later Goryeo Kingdom, said the nation is the body of a people and their history is their soul. What nation or what people would consent to the affliction of their soul, or the taking of any part of their body? Japan must confront this issue. I look forward to seeing responsible and earnest action that will seek in particular to heal the pain of those who, even now, carry with them the scars of history.

Further, I hope that we will be able to realize peace and common prosperity in Northeast Asia together.

The present situation is a paradoxical one, in which the level of economic interdependence in the region is growing even as the tensions surrounding historical and territorial issues continue to rise. The Northeast Asian Peace Initiative that I introduced seeks to overcome this challenge by providing a framework for multilateral dialogue that begins to implement cooperation and dialogue in the areas where this is currently possible and later expands the scope of cooperation to different areas such as security.

I hope to see active participation in such efforts by the countries of Northeast Asia so that we may succeed in establishing a new regional order unlike any attempted in the past and open the way to our shared future.

The proud history of the Republic of Korea has been written with the wisdom and courage of the people. On the basis of this strength, I hope all of you will set out with us to lead Korea through new changes and new challenges. Drawing on your collective potential and abilities, I will usher in a new era of hope and happiness for the people and build this nation into one that inspires great respect.

I ask those in the political sector to also join with the people, becoming partners in a new kind of cooperation for the goal of a new era. It is my belief that, like our forebears and subsequent generations, we too can make a better and a greater nation.

Together with all of you, I will embark on the journey toward a future of greater happiness for Korea as well as greater wellbeing and peace around the world.

Thank you very much.