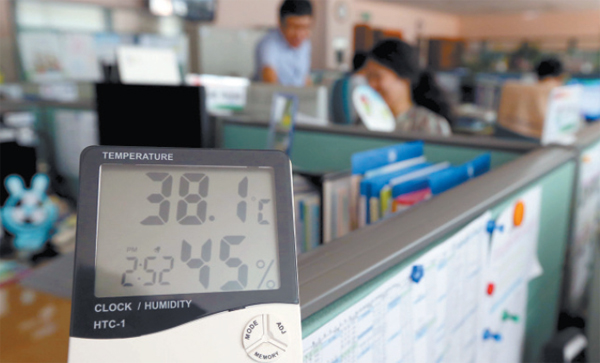 A thermometer on the fourth floor of the Ulsan Metropolitan Office of Education reads 38.1 degrees Celsius (100.58 Fahrenheit) on Aug. 14. By Song Bong-keun

The latest Facebook fad for civil servants, who are on the frontline of the government’s battle to prevent blackouts in this protracted heat wave, represents a simmering protest. They’re posting photos of the temperatures in their offices, which usually hover above 35 degrees Celsius (95 Fahrenheit).

On Aug. 14, a high-ranking diplomat surnamed Lee uploaded a snapshot to his Facebook page of a digital office thermometer reading 39 degrees. It wasn’t hard to find comparable images on fellow public workers’ pages on sites like Twitter and KakaoStory.

This year’s sweltering heat has hit at peak energy-demand season. Compounding the already-distressed state is the shutdown of three nuclear reactors that were caught up in a nuclear industry bribery scandal that had resulted in substandard parts being installed. With the palpable threat of energy shortages, the government has gone all out to conserve.

The Ministry of Trade, Industry and Energy warned that the risk of power outages would be worst between Aug. 12 and 14, but managed to squeak through by making civil servants sweat. The vast majority of public buildings were ordered to turn off all air-conditioning during the hottest days of the year in last-ditch efforts to stave off blackouts.

Korea was spared an energy crisis, but public workers faced a disaster of a different type.

At 3 p.m. on Aug. 14, a thermometer on the fourth floor of the Ulsan Metropolitan Office of Education sat at 38 degrees Celsius.

Some officials were battling the heat with homemade ice packs, while others were facedown on their desks, exhausted, trying to move as little as possible.

People working in Jung District Office in Ulsan came to work equipped. “This is the first time I’ve ever brought frozen bottles,” said Jin Bu-ho, the 56-year-old deputy director of the office.

The public isn’t usually sympathetic to the plight of public workers. But this time has been different.

“I think we overcame a potential energy crisis together, but I think government workers really sacrificed a lot,” noted Choi Mi-hee, a 51 year-old Jung District resident.

But the many words of encouragement did little to beat the heat.

A civil servant at the government complex in Sejong City said that some colleagues were complaining of heat-related illnesses and sinking morale.

“We’ve worked in the sweltering heat for three straight days,” said the official, who requested anonymity.

“I know my colleagues are suffering from nausea.”

In a bid to help its workers make it through, the government is handing out “cool scarves.” Made by a small local apparel company, they contain a refrigerant that reacts with water.

The crisis was not unexpected, however. In June, the Energy Ministry announced that public offices would have to cut their power usage by at least 15 percent in July and August compared with last year, and keep air -conditioners set at above 28 degrees. Private companies and city shops that leave their doors open with the air-conditioners on face fines of up to 3 million won ($2,683).

The Korean government is known for going to great lengths to save energy, as power outages loom in the country’s freezing winters as well.

Last winter, the government encouraged public servants to wear their long johns to work as it tried to prevent blackouts during a cold snap that caused a spike in energy usage.

Meanwhile, the heat wave has led some schools to delay the start of the fall semester.

Nine middle and high schools in Gyeonggi announced that they are pushing back the first day of school, and 200 schools and universities nationwide are following suit.