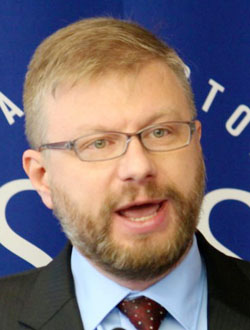 “I have no trust whatsoever in the Kim Jong-un regime,” says Greg Scarlatoiu, executive director at the Committee for Human Rights in North Korea, a Washington-based non-governmental organization committed to human rights conditions in one of the most isolated and repressive countries in the world.

“If we have learned something [about the young Kim], it’s that he’s playing by his father’s playbook,” said Scarlatoiu. “North Korea has lost all trust and credibility.”

In an interview with the Korea JoongAng Daily Wednesday, as the two Koreas were in their seventh round of talks to reopen the Kaesong Industrial Complex, the Romania-born human rights activist gave a grave assessment of how far the 20-something new leader of North Korea would go to end state-orchestrated human rights violations.

“If Kaesong is resumed, this will be the opportunity for the Kim Jong-un regime to prove that maybe it can, at some point, earn some trust,” Scarlatoiu said. “But I am being extraordinarily optimistic when I say this.”

Established in 2001 by a group of former U.S. government officials, Korea experts and human rights specialists, the HRNK has strived to raise awareness of Pyongyang’s most egregious human rights violations such as the running of political prisoner and re-education camps.

“The reports are shared with universities, think-tanks in Washington, D.C., and members of Congress. So our job is not to lobby but to contribute to an informed policy dialogue on North Korea.”

HRNK exposed to the world atrocities inside political prisoner camps in its report “Hidden Gulag,” which was published in 2003.

“We are the organization that first put the North Korean hidden gulag on the map [through] our report in 2003, and after that public opinion in the U.S. pretty much came to realize what was happening [in the North],” Scarlatoiu said “[The 2003 report] was really a game changer in the discussion of the North Korean gulag. In 2004, Congress passed the North Korean Human Rights Act.”

Married to a Korean for 15 years (the couple has two daughters), Scarlatoiu is a fluent Korean speaker with a master’s degree in international relations from Seoul National University. He says his interest in North Korean human rights partly stems from his being raised in Romania under Nicolae Ceausescu, a communist leader who was once close to the founder of North Korea, Kim Il Sung.

“I lived the first 20 years of my life in Romania,” Scarlatoiu said. “Basically, I was born under the communist regime that was similar to North Korea.”

During a one-month stay in Korea, Scarlatoiu gave lectures at Hankuk University of Foreign Studies on North Korean human rights and hosted events aimed at raising public awareness of the dire situation of North Koreans.

Scarlatoiu organized a press conference at the National Human Rights Commission of Korea Tuesday with a North Korean defector who survived three years in one of the notorious re-education camps in North Hamgyong Province in the late 1990s.

The defector told the press that in executions held three times a month, three to 10 inmates were strangled to death with a strap for having improper political beliefs.

Scarlatoiu expressed one wish in regards to South Korean lawmakers: He wants them to pass the North Korean Human Rights Act.

“If the National Assembly passed the North Korean Human Rights Act, then significant resources would be made available to organizations dealing with North Korean human rights,” he said.

The bill, first submitted in 2005, has been adrift for eight years at the Assembly.