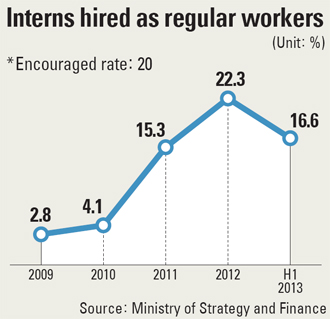 Despite the government’s efforts to offer more quality jobs for young people just out of college, data showed yesterday that only one in six interns at public companies and institutions were hired as regular employees during the first half of this year.

According to the Ministry of Strategy and Finance yesterday, from January through June, 14,000 interns, or 16.6 percent of all interns, were hired by public companies as regular employees.

The percentage is a sharp drop from 22.3 percent for all of last year and below the government’s goal of 20 percent.

The ministry, however, is optimistic that the rate will go up during the second half of the year.

“We expect internships to end in the second half of this year and there will be more hiring of interns as regular employees by public companies and institutions,” said an official from the ministry.

In late 2008, in the wake of the global financial crisis led by the Lehman Brothers’ bankruptcy, the finance ministry under the Lee Myung-bak government came up with plans to create more jobs for young people to help boost the economy and raise productivity. Plans included the government setting aside funds to provide financial support like wages to public and private companies that hire interns.

The government also has urged companies to hire them as regular employees once their less-than-one-year contract ends.

Overall, data released by the finance ministry showed that 295 public institutions in the first half of the year hired 12,556 interns, nearly 98 percent of this year’s goal of 12,800. The number of interns being hired is reflected in the country’s employment rate, as they receive monthly wages of about 1.2 million won ($1,077) and work 30 to 40 hours a week.

By industry, public companies in the energy sector, including the Korea Electric Power Corporation and Korea Hydro and Nuclear Power Company, hired the highest number of interns in the cited period, followed by those in the welfare sector such as the National Health Insurance Corporation and National Pension Service.

Government officials in the current Park Geun-hye administration have been putting their heads together to boost the country’s employment rate, which currently lags behind other developed countries. The government’s goal is to reach 70 percent employment by the end of President Park’s five-year term.

According to data from the Organization for Economic Cooperation and Development, Korea’s employment rate has remained between 63 percent and 64 percent over the past decade, which is below the average employment rate of 69 percent for countries with $30,000 per capita GDP.

The latest figures released by Statistics Korea also showed that in July, the jobless rate for those aged 15 to 29 went up to 8.3 percent from 7.9 percent of the previous month. There are concerns being raised that the country’s economy would lose steam amid the prolonged slow economic recovery due to uncertainties at home and abroad.