Jeonse is going through the roof

Jeonse is going through the roof 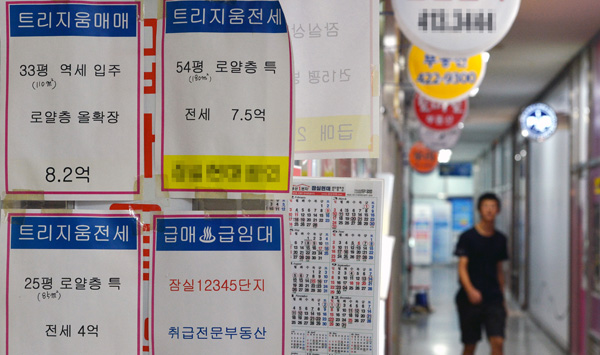 Notices listing house sale and rent prices are plastered on the wall of a real estate office in Jamsil, southeastern Seoul, in this Aug. 11 photo. Jeonse prices have been shooting up over the past four years. [NEWSIS]

A 33-year-old office worker at a large corporation surnamed Lee, who plans to wed in November, is troubled by the unexpectedly high cost of marriage as the jeonse price of the apartment he singled out as their marital home in Pyeongchon, Gyeonggi, has increased.

Recently, Lee visited a real estate agency after finding the jeonse market price of the 58-square-meter (624-square-foot) apartment in June was 140 million won ($125,640). Lee thought he would have to pay a little more than that

However, he was told that the jeonse price of the same apartment has shot up to 160 million won. He considered looking for another place, but signed the lease contract after hearing that many people getting married in the fall look for jeonse apartments in advance.

The price of jeonse, in which tenants pay a large lump-sum deposit, normally for a two-year contract in lieu of monthly rent, has climbed for 51 straight weeks in metropolitan areas.

The KAB cited the higher demand for jeonse ahead of the wedding season and house-moving season in fall as the main reason for the increase.

“The shortage of jeonse apartments in metropolitan areas is getting worse as the number of occupancies for new apartments is decreasing,” said Ham Jong-young, senior research fellow at KAB. “It seems that the rising price of jeonse phenomenon will likely continue for the time being.”

There are also concerns that rising prices of jeonse will hurt consumption. According to an analysis by the Bank of Korea, when the price of jeonse increases 1 percent, private consumption reduces 0.18 percent in the long term and 0.37 percent in the short term.

It is the first time in 25 weeks that prices of apartments have declined in provincial areas.