Coach makes leaders out of losers

Coach makes leaders out of losers 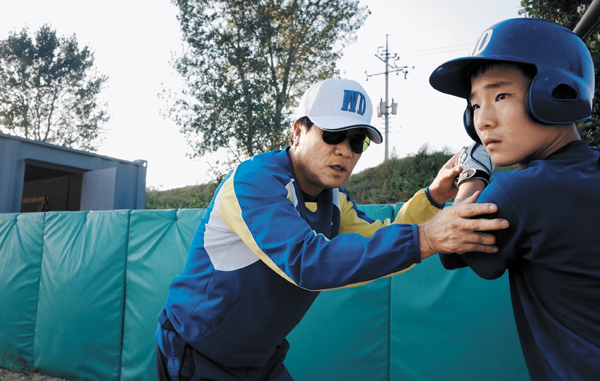 Under a scorching afternoon sun at Gokgang Field in Pohang, Shin Jong-se guides a young player in the art of the swing. By Han Young-ik

On any given summer day, Wondong Middle School’s baseball team is out honing their skills in the sweltering heat, relentlessly pursued by Shin Jong-se. The 56-year-old veteran of the sport, who has come to be known as “Busan’s tough guy,” has singlehandedly turned around the fortunes of not just the team but the entire school, which was on the brink of closure. And all that in just a year and a half.

“There you go. That’s how you pitch! Sara-it-nae!” the coach shouts in a thick Busan accent as he guides one of his players. “Sara-it-nae,” literally, “You’re still alive,” roughly translates as “You’ve got it going on” - a catchphrase made wildly fashionable (typically among the male half of the population) by the gangster film “War on Crime: The Golden Age of Bad Guys,” which is set in Busan.

On Aug. 4, Wondong won the President’s Flag at the 43rd Middle School Baseball Championship. The win was a Cinderella story for the rural school, whose team has only been around for two years.

The team’s first run at a competition was riddled with losses, “We lost every single match,” said Shin, “but our first ever win at the Gyeongju Mayor’s Cup was a turning point - an end to the defeatism.” That was the moment when the players started working hard on their own, he said. “That was why we were able to win the President’s Flag. It was crucial that the players wanted it themselves.”

In February last year, Shin moved to the school in Yangsan, a small town a few kilometers outside of Busan. Eighteen months was all it took for Shin to bring the national championship to a side that had lost practically every single match before his arrival, defying skeptics who initially saw no hope in such a backwater team.

What Shin did was to instill the team with a work ethic that before his arrival didn’t exist: “Work hard, or die.” But with that motto came an intensive regime of basic drills and fitness exercises. “I had to say things I didn’t like,” said Shin. “It was painful for me. But to overcome our limits, there was no other way. Fortunately, the kids are working hard on their own nowadays.”

The team was being held back by a lack of confidence, he said. “It was a team that consistently lost. As a coach and leader, my job was to push them to work hard and endure the pain that came with it. Now we’re winning games. Confidence is on our side. And the kids have started training hard on their own initiative.”

Training starts at 3 p.m. in the afternoon and runs all the way until 10 at night, but some of the players go on till 11 or 12, says the coach. “Some of them never want to face such embarrassment ever again. If the kids are that determined, I have no choice but to stay on until late.”

From the very beginning, Wondong’s baseball team has had a rocky path. Their first coach was Shin’s son, Shin Min-gi, a 33-year-old former Hanhwa Eagles player. But he lacked coaching experience and ended up running into trouble with the parents. He resigned within a year. The father brought in on a wave of parental demand because of his decades of experience coaching.

Before taking over the Wondong team, Shin Jong-se coached at his own Daedong Middle School in Busan for 20 years. Orix Buffaloes infielder Lee Dae-ho, police team pitcher Chang Won-jun, and Samsung baseman and outfielder Chae Tae-in are some of the proteges to have been mentored by Shin.

His transformative reach doesn’t end with the baseball team. Just three years ago, Wondong Middle School had a student body of just 20 students, but that number has now more than doubled. To a large extent, the school escaped the prospect of closure because of the dramatic change in the baseball team’s fortunes. Now, Shin is receiving calls from parents in Gyeonggi and Chungcheong trying to get their kids into Wondong Middle School to play for his team.

Having made a home in Yangsan to while away his days after retirement, Shin said, “I couldn’t leave baseball. I simply love the sport too much. If the game needs me, I will go on as long as it’s physically possible, especially if it’s for raising young talent.”