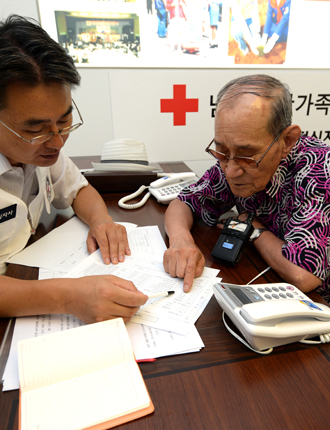 Yu Hak-gi, right, registers an application with the South Korean Red Cross yesterday to be reunited with his younger brother in the North. Yu is an 85-year-old native of Yonbaek, Hwanghae Province. [NEWS1]

South Korea proposed Red Cross talks to North Korea, to hold reunions of families divided during the Korean War, a day after President Park Geun-hye formally suggested it in a speech.

As of press time yesterday, North Korea did not respond to the proposal.

According to the Unification Ministry, the Southern government sent a fax at around 11:40 a.m. yesterday to the North through the liaison officials of the two Koreas, proposing low-level talks on Aug. 23 at the Peace House on Southern territory of the border village of Panmunjom.

“Our side proposed working-level, inter-Korean Red Cross contact at Peace House on Aug. 23, in order to discuss humanitarian issues, including family reunions ahead of or after the Chuseok holidays,” a statement by the Korean Red Cross read yesterday. “We expect North Korea to actively respond to this suggestion to resolve the matter of family reunions, a purely humanitarian issue.”

A Unification Ministry official told reporters yesterday there was no response from North Korea.

“The liaison officials at the Panmunjom had their closing communication at 4:30 p.m.,” the official said. “There was no response from the North.”

Today, there will be no official contact through the Panmunjom lines, according to the ministry.

In her speech on Liberation Day, Thursday, President Park formally proposed resumption of the reunions of families separated during the 1950-53 Korean War as well as launching a jointly-run “peace park” in the heavily-armed Demilitarized Zone.

Due to frosty inter-Korean relations, the reunions have not been held since November 2010.

“In former Red Cross talks, we dealt with the matter of food aid or other humanitarian assistance,” the official told reporters. “We could deal with those issues again, but don’t make a hasty judgment.”

Previously, North Korea proposed restarting the family reunions and South Korean tours to Mount Kumgang, but the South was only interested in discussing the reunions issue and the North withdrew its proposal.

A big question is whether Pyongyang would negotiate with Seoul after the start of the two-week Korea-U.S. joint military drills called Ulchi Freedom Guardian, which begin Monday.

In March, North Korea angrily cut off the military hotlines with the South due to two joint military exercises between Seoul and Washington, Key Resolve and Foal Eagle.

According to the Unification Ministry, a total of 128,842 South Koreans applied for reunions since 1988. However, 55,960 of the applicants subsequently died.

Starting in 2000, a total of 18,143 South and North Korean relatives had reunions in Seoul or Mount Kumgang.