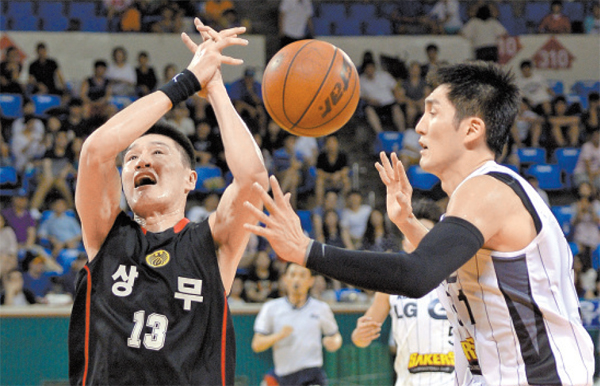 Sangmu’s Yoon Ho-young, left, vies for the ball with the LG Sakers’ Ki Seung-ho during the KB Pro-Am Basketball Championship in Seoul, yesterday.[NEWSIS]

The Ulsan Mobis Phoebus knocked the Wonju Dongbu Promy out of the Pro-Am Basketball Championship in the first round yesterday, handing coach Yoo Jae-hak his first victory after he earned Korea’s first berth to the World Cup in 16 years.

The military-affiliate Sangmu got off to a good start in its title-defense bid by beating the Changwon LG Sakers 79-71 in the first round. Heo Il-young led the Sangmu with 31 points, while the MVP of last year’s edition, Yoon Ho-young, added 12 points and 10 rebounds. The Sangmu will square off against the Anyang KGC in the second round tomorrow.

The Phoebus will meet Kyung Hee University in the quarterfinals tomorrow, setting up a showdown between Yoo and two of his best pupils with the national team - Kim Min-goo and Kim Jong-kyu.

“I left for the national team after entrusting the team to assistant coaches Kim Jae-hoon and Cho Dong-hyun, having only informed them of basic guidelines, but they have made it into a good team during my absence,” Yoo told reporters. Yoo led Korea to a third-place finish at the FIBA Asia Championship in the Philippines earlier this month. The top three teams move on to the FIBA Basketball World Cup.

“It will be a really difficult game with Kyung Hee University,” the coach said, mentioning in particular guard Doo Kyung-min, and two towering centers Kim Jong-kyu (2.07 meters, or 6.8 feet) and Oh Jeok-ryong (2.04 meters) as players to look out for.

Kyung Hee beat the Jeonju KCC Egis 70-56 on Friday, becoming the first college team to ever get past the first round since the pro-amateur competition was introduced last year. Korea University also joins Kyung Hee in the second round by beating the Goyang Orions 89-82 on Saturday.

Kyung Hee guard Kim Min-goo, who was the leading scorer for Korea during the Asia Championship with 12.7 points per game on average, exploded for 27 points against the Egis. Doo Kyung-min added 20 points and Kim Jong-kyu scored 17 points.

Yesterday’s game with the Phoebus was Lee Choong-hee’s debut at the Promy helm. He took over in April from Kang Dong-hee, who was convicted in a match-fixing scandal.

Lee said that it was a “satisfying” loss. “We had few big men and trained only three days,” he said, referring to the absence of Kim Joo-sung, who sustained a knee injury during the Asia Championship. Dongbu’s other pillar, Lee Seung-jun, only played in the first quarter so he could rest. “I saw our potential in this game,” he said.

The Incheon ET-Land Elephants also reached the second round by beating the Seoul Samsung Thunders 78-69 on Saturday. The Busan KT Sonicboom and the Seoul SK Knights secured a berth in the quarterfinal on Thursday by beating Hanyang University and Yonsei University, respectively.