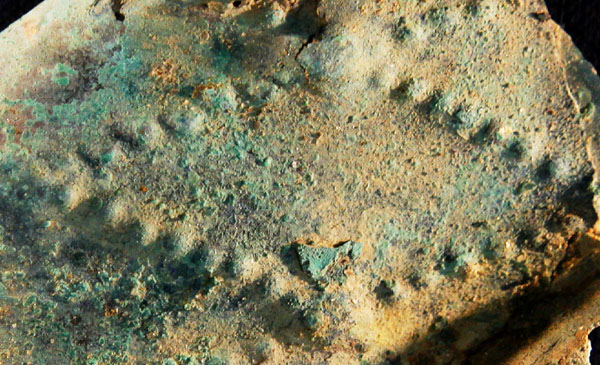 Golden shoes, the first pair found in a Gaya tomb, were badly damaged, but researchers also found golden thread and nails. Provided by the university

Among the histories of Korean dynasties, the history of Gaya is perhaps the least-known.

Gaya was the confederacy of territories in southern Korea between the first and sixth centuries, which means that it existed during the Three Kingdoms era (57 B.C.-A.D. 668), which refers to the time when the three powerful kingdoms on the Korean Peninsula - Goguryeo, Baekje and Silla - existed and vied for control.

Chonbuk National University Museum announced on Aug. 11 that its researchers have discovered about 140 relics from an ancient tomb from Gaya in a complex of tombs in Durak-ni in Namwon, North Jeolla. The tomb - about 21 meters (68 feet) in diameter - is believed to have been created some time around the fifth century and belonged to a powerful aristocrat of Gaya.

The relics included a pair of Baekje-style golden shoes, a bronze mirror and some other ceramics and metalware, making people imagine that Gaya’s elite adorned themselves with flamboyant and luxurious gold and bronze accessories. This marks the first time that golden shoes have been discovered from a Gaya tomb.

“The golden shoes are significantly damaged because stone covering the tomb fell on it,” the museum said in a press release. “However, we were able to find golden thread and nails. It appears to have adopted the technique in which artisans made patterns by banging from inside out, which is similar to the Baekje golden shoes found in Iksan [North Jeolla] and Naju [South Jeolla].”

The round mirror - with a diameter of 17.8 centimeters - was found near the head of the deceased, with traces of red prints and wooden decorations, museum officials said.

“We will find out more about the mirror once we give it preservation treatment, but it appears to bear resemblance to the mirror found in the tomb of King Muryeong of Baekje [in Gongju, South Chungcheong] in terms of its form, size and structure,” said Kim Seung-ok, the museum’s director and the university’s archaeology and cultural anthropology professor. ?

Historians say there is much to be studied about Gaya with the recently-uncovered relics. They say based on the tomb, its location and the relics discovered, Gaya appears to have formed a stronghold in the region and that Gaya’s power must have been tantamount to that of Baekje at one point.