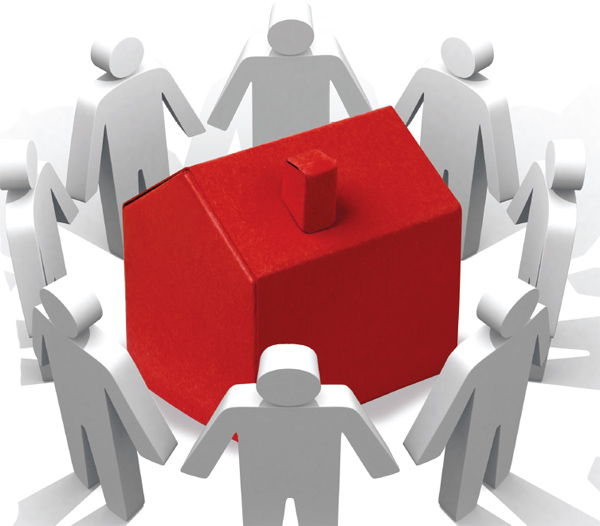 “We share the house and pay 300,000 won ($269) each per month in rent,” Seo said. “It’s getting to be quite common among students like us to find housemates to share the costs of a decent but affordable place to live.”

With the help of his parents, Seo had intended to find a house on a two-year lump-sum (jeonse) contract, but there were none available early this year.

Luckily, on a real estate Web site, Seo found a posting for a three-bedroom apartment, whose owner was leaving Korea for a year. He called up his friends.

In the past, young people rarely teamed up as housemates. But the real estate market is depressed, which has jacked up demand for jeonse contracts because people don’t want to buy new units. As a result, jeonse prices have skyrocketed and supply is short. So renting on a month-to-month basis - and sharing an apartment with friends or even strangers - is becoming more common.

More than 100 new postings looking for housemates are being added every day at one of the largest real estate homepages, up from 20 to 30 early this year.

The postings specify the area the poster wants to live in, the monthly rent he or she is looking for, the number of housemates needed and the gender.

Many young Koreans have experienced living with strangers in other countries during their overseas education or language courses.

“You can pay much less in monthly rent when sharing a house,” said Seo. “If I rented a studio apartment, I’d have to pay at least 500,000 won a month.”

The so-called “wild geese fathers,” gireogi father in Korean, are also part of the change. “Goose father” are forced to live alone because their wives and children are living abroad, usually for the kids’ education. They visit their families abroad once or twice a year, which is why they’re compared to wild geese, migratory birds.

Park Nam-pyo, a 48-year-old salaried employee at a conglomerate, is a goose father. His wife and sons are in the U.S. because the two sons are attending American high schools. So Park rented out two rooms in his house to strangers: a 21-year-old college student and a Canadian tourist staying for several months.

“It’s like killing two birds with one stone,” Park said. “Because of them I keep the house clean, and I don’t feel lonely either,” Park said. “At the same time I can offer help for those who are struggling to find affordable housing.”

Due to low interest rates, many apartment owners have switched from charging jeonse, which will earn little, to monthly rent payments. The jeonse was at least 250 million won for a two-bedroom apartment in peripheral areas of Seoul, and in the early 2000s, the owner could earn 7 percent to 8 percent interest. According to the Ministry of Land, Infrastructure and Transport, of all housing rent contracts in the first half of this year, 39.8 percent charged monthly rent, up from 33.9 percent last year. During the same period, the proportion of jeonse contracts fell from 65.9 percent to 61.1 percent.
However, demand for jeonse houses is still high.

“We get more than eight calls every day asking for jeonse, and we have at least 10 people on a shortlist as one comes on the market,” said Choi Ki-hoon, a realtor in Banpo-dong, Seocho, southern Seoul.?

Runaway jeonse prices are also affecting young couples planning to get married. People in their late 20s or early 30s who don’t have much savings are having difficulty finding affordable places.

Traditionally, men have been prepared the money for the jeonse or house purchase while women are asked to buy furniture and home appliances.

According to a recent survey of 100 female customers at a branch of Lotte Department Store, 45 percent of the respondents said they would choose to add money to secure housing, while cutting back on other spending needed for their marriage.

Although the respondents said they were buying fewer items to furnish a home, the survey found they would spend more than 35 million won for marriage preparations, up from 23 million won last year.