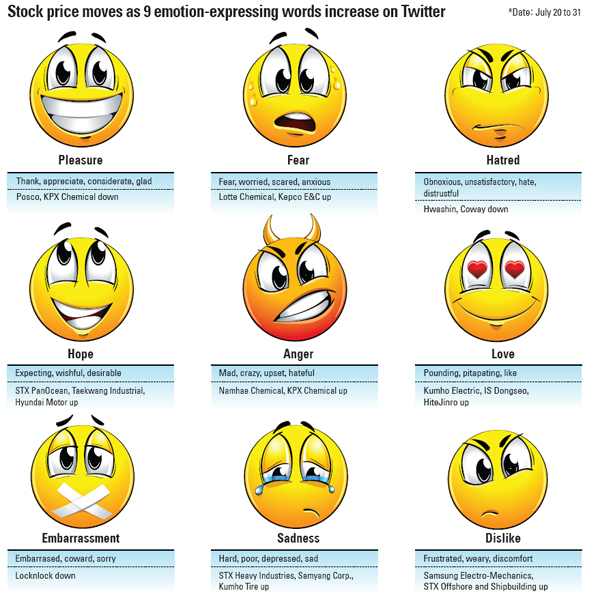 Maybe so, if the Socialmetrics Fund is any indication.

The fund is a collaboration by Daumsoft, a big-data mining company, and Kang Hyoung-goo and his research team at Hanyang University business school.

They started to invest in stocks on analysis of Korean Twitter feeds.

It is a Korean version of Derwent Capital Markets, a British family-owned hedge fund, started in 2011 on the premise that market trends can be foreseen in the emotions expressed on social media.

A 2010 study by the University of Manchester and Indiana University found that Twitter was useful in predicting Dow Jones Industrial Average performance.

In Korean, the team invested 30 million won ($26,921) last year and saw a 9.7 percent return. Since June, they invested an additional 20 million won in Socialmetrics and have seen a return of 2.32 percent as of last Monday.

Last year, the Kospi returned 6.1 percent; since June it has lost 2.48 percent.

Then the company provided marketing consulting based on analyses of the results, focusing on the influence of emotion on consumption.

Soon, Daumsoft started to wonder if its findings could be applied to stocks.

Its system correlates the frequency of words related to nine emotions found in Twitter posts to individual stocks, then decides where to invest the fund’s money.

For example, there was a correlation between “love” and an increase in the share price of HiteJinro’s stock. So the company buys the liquor company’s shares when it sees a lot of love on Twitter.

Because the effect of social media emotions on stocks is time sensitive and requires analysis, the Socialmetrics team trades during the last 30 minutes before the market closes, based on emotions collected over two days.

“The most recent emotions have the most impact on price,” said Kang Hyoung-goo, cofounder of Socialmetrics.

The results proved that negative emotions such as fear and hatred have a greater influence than positive ones like pleasure and love.

The Socialmetrics team found that fear had a correlation of 99.8 percent with Kepco E&C shares. Kepco E&C is a subsidiary of Korea Electric Power, which designs power generators.

“As more people fear something, Kepco E&C shares climbed,” said Ban. “We are not sure why, but I assume the value of public services, in this case electricity, goes when fear is widespread in the society.”

The Socialmetrics fund showed an 11.3 percent return on Dec. 18 but dropped to 9 percent on the day after the election.

“As more accounts were created for political purposes, there was an increase in data without emotional elements,” Kang said. “We learned data based on emotions is less credible in the political season.”

The financial investment industry has been rushing to mine big data. The state-run IT service company for the capital market, Koscom, recently developed an emotion analysis index, using 2,500 stock-price-related words on SNS, categorized into five levels of correlation.

“After analyzing 40 items from Kospi, and 10 items from the Kosdaq and Kospi 200 index, we concluded that predictions involving the Kospi 200 index were more accurate than for individual stocks,” said Park Young-do, a researcher at Koscom Capital Market IT R&D Institute.

Koscom will commercialize the data, after a trial planned at the end of the year.

Hyundai Securities developed an index derived by analyzing news stories. When positive or negative news events affect a particular stock, the index is created by analyzing the changes in price and volume of trading.

“We are in the early stage of development but have already started using it in our research center. Once it gets more cleaned up, we will make it available throughout our company,” said a researcher at Hyundai Securities.