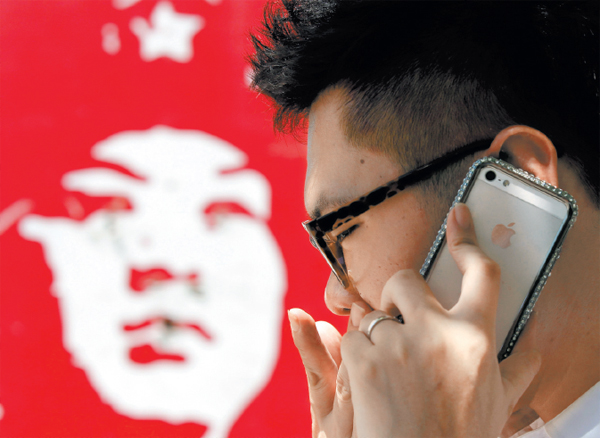 A man talks on an iPhone in Beijing as a long-awaited deal between Apple and China Mobile seems possible. [REUTERS/NEWS1]

The stars may be aligning for a long-awaited deal between Apple and China Mobile, the world’s biggest mobile carrier, that could help the iPhone maker claw back lost ground in its most important growth market.

Apple is expected to unveil its redesigned iPhone next month and may also release a cheaper, emerging market smartphone. Crucially, it also now has Qualcomm chips that can operate even on China’s obscure networks.

At the same time, Beijing is expected to grant 4G licences by the year-end that favour the biggest of its domestic mobile operators.

Apple has so far ducked a deal with China Mobile as this would have required a redesign inside the iPhone to work on the operator’s inferior TD-SCDMA 3G technology. For its part, China Mobile has been reluctant to commit to the huge cost of marketing and subsidizing sales of the expensive iPhone.

By offering a mid-market Apple smartphone, China Mobile, which has 740 million users, could draw in more sophisticated, data-crunching subscribers to grow net profit that last year was only 15 percent higher than in 2008, when Apple opened its first store in China.

While the 4G licences are expected to be based on TD-LTE technology, rather than the more widely-used FDD-LTE, the new Qualcomm chips can handle both systems, saving Apple from a major re-design just for the Chinese market, albeit the world’s largest.

“The circumstances and the issues that were a hindrance in the past seem to be getting resolved. So I think there’s a higher probability that potentially there’s something in the works,” said Anand Ramachandran, a telecoms analyst at Barclays in Singapore.

“We are actively negotiating and both sides are keen,” Xi told reporters on Thursday after announcing half-year results. “There are still some commercial and technology issues that need time to resolve,” he added, without elaborating.