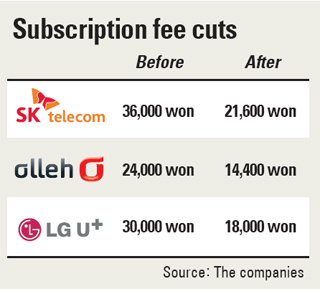 The nation’s telecom companies are shaving 40 percent off subscription fees in order to comply with a government mandate from earlier in the year.

“By lowering the subscription fee, we hope to ease the financial burden of telecommunications on customers,” said an SK Telecom official.

SK Telecom is the largest of the nation’s big three telecom companies and has the most subscribers, controlling more than 50 percent of the total market.

KT was the first one of the three to do so. It announced on Friday that it is lowering its subscription charge from 24,000 won to 14,400 won. 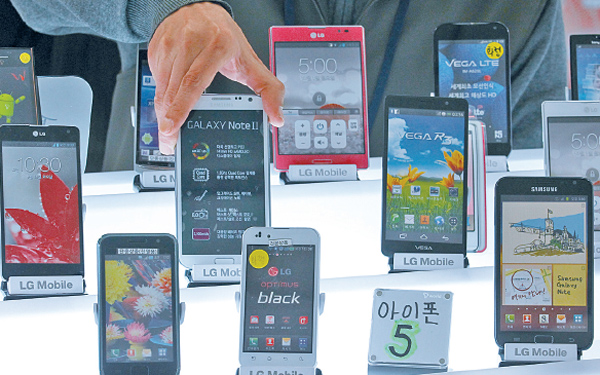 In April, the Ministry of Science, ICT and Future Planning laid out a plan to completely abolish fees charged when customers sign up for a mobile service plan by 2015. After this year’s cut, another 30 percent drop is scheduled for next year. The final 30 percent is slated to go into effect in 2015.

The Future Planning Ministry estimated that the plan will save mobile users up to 500 billion won.

It added that in 24 of the 34 OECD member countries, a fee is not charged when you sign up for a mobile service.

The abolishment of subscription fees was one of the campaign promises President Park Geun-hye made during her presidential campaign last year.

Up until now, telecom companies have imposed a fee when customers register for cell service, citing costs incurred in the process of signing up new subscribers. But there have been complaints about the extra fees, especially since many new subscribers sign up electronically at minimal additional costs for the company.

Last year, SK Telecom is estimated to have made 360 billion won from subscription fees. Runner-up KT made around 120 billion won, and LG U+ made an estimated 67 billion won.