Even rich aren’t spending this year

Even rich aren’t spending this year 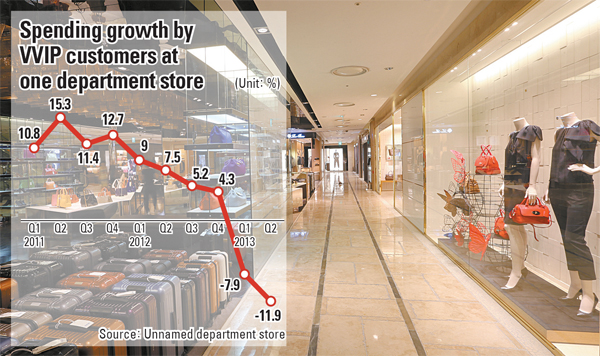 Luxury brand stores remain empty at a department store in central Seoul as both the upper- and middle-class tighten their purse strings. By Kang Jung-hyun

Furniture Street in Nonhyeon-dong, southern Seoul, is pretty dull. A survey of around 20 stores finds a single customer flipping through a catalogue without much interest. Next door, a three-story furniture shop has no customers and four shop assistants with vacant looks.

“We mainly sell imported couches from Italy, but unlike in the past our sales have dropped up to 30 percent recently,” the shop’s manager said. “The only thing we manage to sell are items on display, because they come with a discount.” 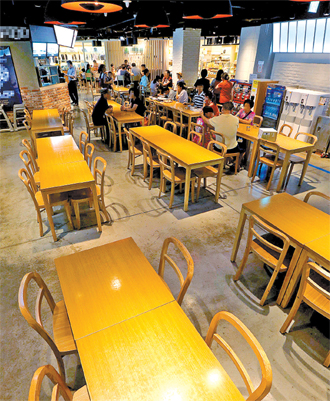 Nonhyeon-dong’s Furniture Street, a mecca for luxury furniture, caters to the well-off. But the well-off are keeping their wallets inside their designer bags these days thanks to the sluggish economy.

A local department store recently analyzed the spending patterns of its VIP customers, whose spending is in the top 1 percentile. In the first quarter of 2013, their spending dropped 7.9 percent compared to the previous year. The fall was even deeper in the second quarter. Rich people started worrying about tax investigations as the central government went after the underground economy to increase its revenue. The VIPs spent 11.9 percent less in the second quarter compared to the year before.

The department store said it was the first time spending levels by top VIP customers dropped in the double digits.

“VIP customers have cut down their spending, mainly on furniture and home appliances, from the second quarter as public sentiment about rich people has soured with the ongoing tax investigation,” said an official from the department store. 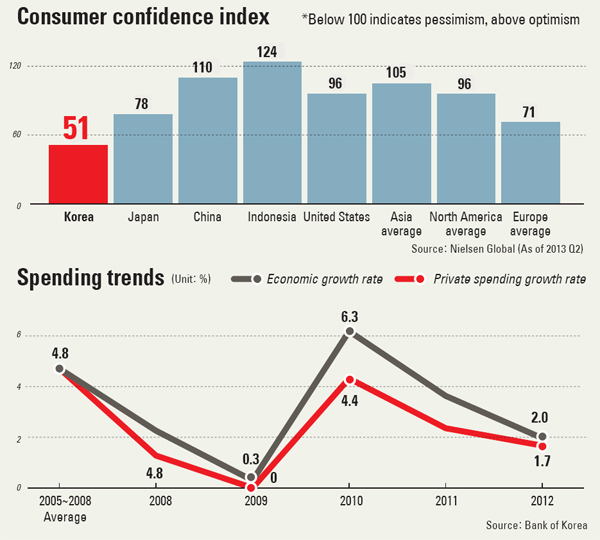 “When the economy turns bad, people with enough cash in their pockets also cut down on spending because they feel they’re committing some kind of crime,” said Jeon Tae-yoo, a professor at Sejong University. “There should be an environment created in which high-income households feel free to buy whatever they want despite a sluggish economy or else they will spend more overseas, which will negatively affect Korea’s economy in general.”

Middle-income Koreans are also watching their spending. Sales of budget cosmetics, popular among consumers in the middle-income bracket, have plunged up to 20 percent even in the summer discount season, compared to the previous year.

Able C&C, a cosmetics company that makes the Missha brand, posted a 2.09 billion won ($1.87 million) operating loss in the second quarter of this year. It is the first time the company posted a loss since the fourth quarter of 2007.

A local family restaurant chain that is popular with middle-income families saw its sales growth decline to a single-digit this month.

A local confectionery company has delayed the launch of a new product. It thinks the excitement level will be low while people try to save money.

“A snack becomes a steady seller only after it receives a lot of attention in the early stage after its release,” said an official from the company. “So at a time when the overall consumer sentiment isn’t strong, it’s difficult for us to make a success of a new release.”

Both the rich and middle-income groups are acting stingy when there’s actually a recovery in the economy.

Recently, the Bank of Korea announced that in the second quarter the economy expanded 1.1 percent compared to the previous quarter, escaping from less than 1 percent growth for the previous nine months. Although the BOK showed optimism that the economy was getting back some steam, spending is still depressed. The rich are afraid of getting caught by the taxman if they spend their available cash. The middle-income group doesn’t have any. 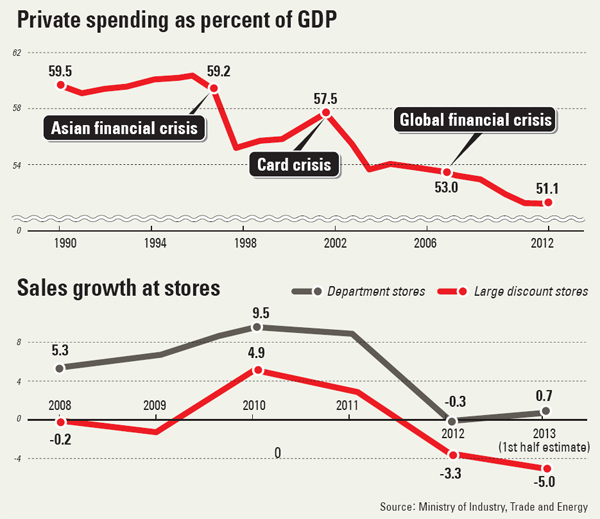 According to Nielsen Global, Korea ranked among the lowest in terms of consumer confidence index in the second quarter of this year. The index for Korea was 51, lower than the average for Asia (105), the United States (96) and even Europe (71). The main reason why Koreans have closed their wallets is because they have become concerned about the high level of household debt.

The ratio of household debt to disposable income for Korea is 164 percent, which is higher than Japan’s 132 percent and 120 percent for the U.S. The volume of household debt also reached 1,099 trillion won as of end of last year.

“For consumers to expand their spending, there should be some kind of confidence that the country’s economy will improve, but there’s no such confidence in Korea,” said Ye Jong-suk, a professor from Hanyang University.

Analysts worry that Korea might fall into the vicious cycle that affected Japan, in which falling corporate profits and shrinking facilities investment led to lower employment, reduced consumer spending, a drop in consumer prices, and even worse profits for companies.

“The current situation in Korea is a typical round of deflation in which prices fall because of falling demand,” said Oh Jung-geun, an economics professor at Korea University. “There should be a sense of seriousness that we might follow the path of Japan [of deflation] if we don’t do anything about it.”

“The country’s economy has already stepped into deflation,” said Kim Chan-koo, a senior researcher at Hyundai Research Institute. “The government should do something about it to prevent the country from falling into a vicious cycle by stimulating real estate transactions and expanding investment demand.”