Get real on welfare, say analysts

Get real on welfare, say analysts 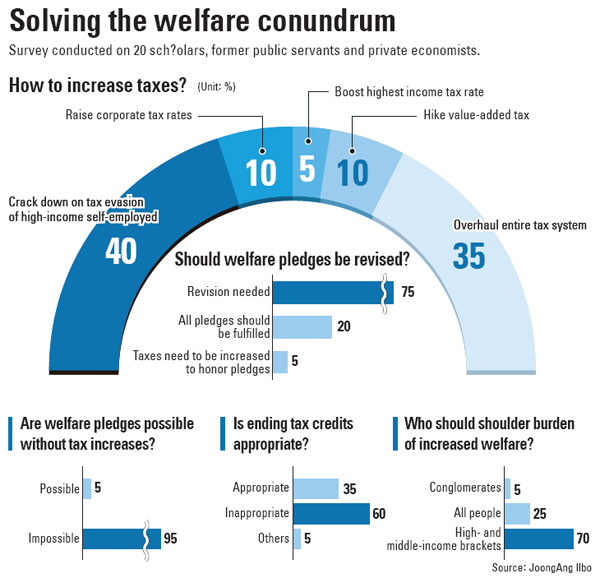 Economic analysts agree that it will be impossible for the Park Geun-hye administration to carry out its welfare pledges without increasing taxes.

According to a survey conducted by the JoongAng Ilbo, 19 out of 20 analysts in the fields of macroeconomics, finance and taxation said, “Expanding welfare benefits without raising tax rates is impossible.”

The Park government has promised to expand welfare benefits by 135 trillion won ($120.9 billion) over the next five years, or 27 trillion won additional per year. In 2012, the Lee Myung-bak administration spent a total of 97.4 trillion on welfare.

“It is possible for the next five years,” he said.

But even Ahn believed it was impossible to afford the spending longer than that.

Before increasing taxes, the analysts said the government should reconsider its welfare pledges.

A government plan to axe tax credits to raise more revenue backfired last week when the middle class and opposition in the National Assembly cried foul. The government withdrew that plan and revised it.

Yoon Jeung-hyun, minister of strategy and finance during the Lee administration, criticized what he called unrealistic goals of the current government’s economic team.

“It is underestimating the people when the government says it will keep all its pledges even if it has no money available,” Yoon said. “Before considering tax hikes, the government should first streamline the pledges.”

Kim Hyung-tae, chairman of the Korea Capital Market Institute, made the argument that there is a limit to solving the funding issue by changing income taxes. By cutting out tax credits, the government had hoped to raise additional revenue of 48 trillion won yearly.

He continued, “There needs to be an entire overhaul of the pledges including expanding social overhead capital in provincial areas.”

The analysts’ main argument is that the public won’t accept bigger tax bills at a time of prolonged economic slowdown.

Oh Jung-geun, an economics professor at Korea University, raised the possibility that the government will be forced to slash its welfare pledges after it fails to find revenue.

“Eliminating tax exemptions, reducing tax cuts, going after the underground economy and adjusting government spending are all difficult issues to be handled in reality,” Oh said.

“What the president promised is impossible,” said Kim Tae-yoon, a public administration professor at Hanyang University. “At the very least, people should know that beneficiaries of welfare are also contributing, even at a minimum level. That helps maintain a sense of justice. ‘Welfare zombies’ won’t help society grow in a healthy way.”

The analysts weren’t impressed with the government’s original plan to reduce tax credits or its revised plan.

The Ministry of Strategy and Finance announced Aug. 8 its plan to tax 4.34 million workers who earn more than 34.5 million won a year, increasing at least 160,000 won more in income taxes starting in 2014. This sparked an instantaneous backlash and the president ordered a rewriting of the plan.

The ministry came up with a new version that will only affect people pulling in more than 55 million won a year.