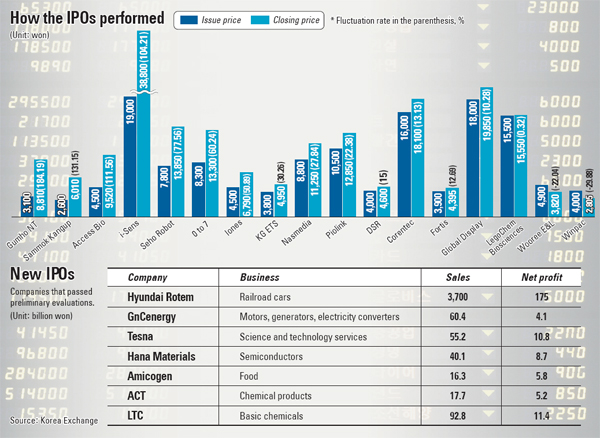 With a surge in stock prices of local companies that went public this year, initial public offerings (IPOs) are blazing hot.

According to the Korea Exchange yesterday, the share prices of 17 out of 19 newly-listed companies this year are above the issue price, and some have soared.

Companies like Gumho NT, a non-woven fabric manufacturer, and auto parts maker Sammok Kang Up, along with Access Bio and i-sens, all saw their shares double compared to the initial offering price.

The stock price of DSR, the only company listed on the main Kospi bourse this year, has increased 15 percent in the three months since it went public.

The competition to get in on the IPOs was sometimes fierce among investors. Shares of KG Eco Technology Services, which went public at the end of last month, were extremely competitive at 390 to 1. It was able to attract 1.2 trillion won ($1.07 billion) for its IPO.

The IPO competition for KT affiliate Nasmedia, which was listed on July 17, was 781 to 1. “Today it’s become common for companies to set the initial offering price much lower than its actual value,” said Choi Jae-woong, an official at Korea Exchange, Korea’s only stock operator.

“Additionally, competition for IPOs has surged as it has become uncommon for companies to go public recently.”

As the hype around IPOs is heating up, special purpose acquisition companies, or SPACs, are becoming more important. SPACs are shell companies whose sole purpose is to merge with a non-listed company in order to make it public. The investors of SPACs collect their profits by raising the value of the stocks of the merged or acquired non-listed company via IPOs.

Last year there was no SPAC activity as the IPO market was in the doldrums. This year alone there are four companies waiting to go public through SPACs.

Expectations for IPOs have been building since the beginning of the year as the global market shows signs of recovery from the financial meltdown of 2008.

The Park Geun-hye administration’s drive to encourage more start-ups under the banner of a “creative economy,” which was further solidified with the establishment of the Ministry of Science, ICT and Future Planning, also helped contribute to the IPO hype.

But mostly, the fact that the prices offered to the public were generally 20 percent less than what the companies were actually worth triggered investor mania.

“For an IPO to succeed it has to guarantee investors a certain amount of profit,” said Han Dong-wook, an analyst at Hyundai Securities. “And to keep investors interested in the IPO, the managing company has to offer a price lower than its actual value.”

As the IPO market recovers, investors are now focused on companies going public in the second half.

There are roughly 30 such companies.

The biggest fish of the season is Hyundai Motor’s subsidiary Hyundai Rotem.

The company, which specializes in manufacturing high-speed trains, had 3.7 trillion won worth of sales last year with net profit of 175 billion won.

There was speculation earlier this year that the company’s IPO might be worth 1 trillion won.

Singsong Holdings, the holding company of Korean sauce producer Singsong Food, is also hoping to be listed on Seoul’s main bourse. The company, which had sales of 165.9 billion won last year and net profit of 12.1 billion won, has been hoping to go public since 2010 but had to ride out the weak IPO market.

Mobile game developers are also showing an interest in going public as smartphone and tablet computer users snap them up.

Sundaytoz, the creator of the popular game Anipang, passed the Korea Exchange’s preliminary evaluation on IPO on July 25. The company is hoping to get listed on the Kosdaq.

Its aim is to get listed on the secondary market through merging with Han Green SPAC.

Pati Game, which developed the mobile game “I Love Coffee,” has recently selected Woori Investment and Securities to manage its IPO.

Unlike Sundaytoz, Pati Game has decided to go public without an SPAC.

The reasons smartphone game developers are interested in going public is because of the highly competitive nature of the mobile game market.

Thanks to the vast popularity of the social media service provider KakaoTalk, game developers that were able to offer their games through KakaoTalk have made huge earnings.

At the same time, competition among the game companies is fierce.

Even major conglomerates such as CJ E&M, which previously concentrated on personal computer games, have started developing mobile games.