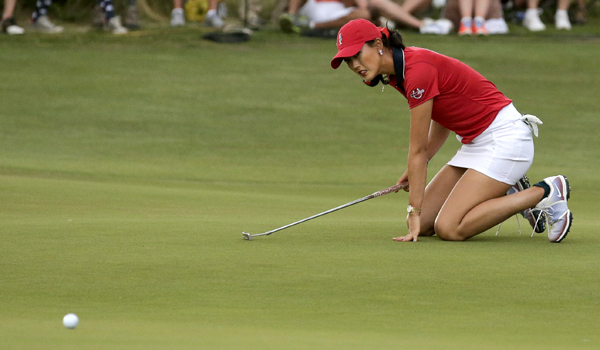 Michelle Wie reacts after missing a birdie putt in her singles match at the Solheim Cup, Sunday. [AP/NEWSIS]

PARKER, Colorado - The Europeans wanted to make history by winning the Solheim Cup on American soil for the first time.

They did better than that.

Caroline Hedwall became the first player in Solheim Cup history to win all five of her matches, the last one with a splendid shot to 4 feet for birdie on the 18th for a 1-up win over Michelle Wie that assured Europe of keeping the cup.

More than an hour later, Cristie Kerr and Karine Icher played all the way to the 18th green until conceding each other birdies. That half-point made it 18-10 in favor of Europe, the biggest blowout since the Solheim Cup began in 1990. And the Europeans did it with six rookies on their team, who combined to go 12-5-2.

Catriona Matthew, at 43 the oldest player on the team, rallied to halve her match against Gerina Piller that gave Europe 14 points and an outright win in America.

Charley Hull, the youngest player in Solheim Cup history at 17, capped off her amazing week by demolishing Paula Creamer in a match that set the tone for Europe. Carlota Ciganda handed Morgan Pressel her first loss in singles in four appearances to go 3-0 for the week. Not even a one-hour delay due to lightning in the area could dampen this European celebration. Suzann Pettersen was lining up her putt on the 16th hole when she heard the cheers from the 18th, got the news and began pumping her fist.

“The way we played 16, 17 and 18, I think, is what really made the difference,” said U.S. captain Meg Mallon. “It wasn’t for lack of preparation because we played this golf course quite a bit. So it wasn’t like a surprise for us. It was just a matter of who dropped the putts on those holes. And unfortunately, it was the Europeans.” AP