Messi does it all in Barca rout as Neymar debuts

Messi does it all in Barca rout as Neymar debuts 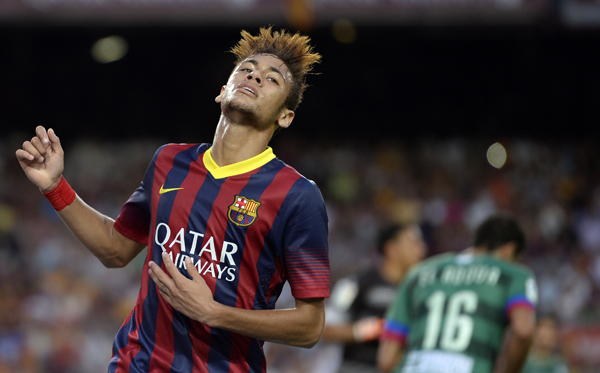 BARCELONA, Spain - Lionel Messi scored two goals and set up another Sunday to help mark the debut of Neymar and Barcelona coach Gerardo Martino in a 7-0 thrashing of Levante, ensuring the Spanish champions start their title defense in style.

While Barcelona rolled to victory, Real Madrid needed a late header by new midfielder Francisco “Isco” Alarcon to edge out Real Betis, 2-1, at home in the first game with Carlo Ancelotti in charge after three seasons under Jose Mourinho.

After Alexis Sanchez opened the scoring, Messi claimed Barcelona’s second goal, stole possession to create the third, and passed for Pedro Rodriguez to score the fourth.

Messi scored his second goal from the penalty spot before Xavi Hernandez made it 6-0 against the demoralized visitors to equal a club record of goals in a first half.

Neymar, who has been recovering from anemia since his €57 million ($76 million) move from Santos in the offseason, went on in the second half in time to see Pedro strike again and polish off the lopsided victory.

“We saw great football and great goals in the first half,” said Neymar. “I’m getting better physically, little by little. I hope to be 100 percent soon. We have started well, with a win. That’s the important thing.”

The applause Neymar received while warming up grew to a standing ovation when he went on for Alexis in the 64th for his first official minutes in Barcelona’s burgundy and blue.

Those eager to see Neymar and Messi together were disappointed, however. The two were only on together for seven minutes before Martino sent Andres Iniesta on for Messi.

The 21-year-old Neymar was active on the left flank but couldn’t find his new teammates with crosses. Goalkeeper Keylor Navas saved his best chance before he was booked for tripping.

Martino said that he had agreed with Messi to take him out once the game was resolved, mindful of the long season ahead and that the player is coming off a hamstring injury.

“Everyone wants to see Neymar and Messi together,” said Martino. “I want his adaptation to be as quick as possible, but without forcing anything. Shortly we’ll see him at his best.” AP