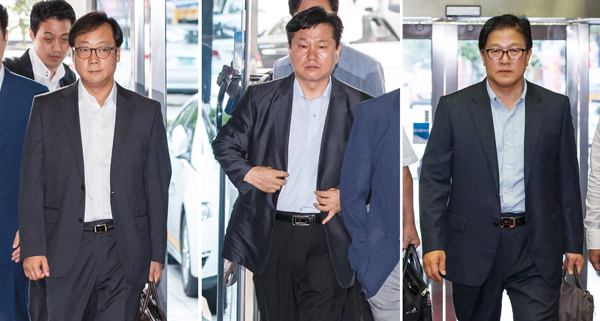 Representatives from the three telecommunication companies entering the TTA office in Bundang, Gyeonggi, yesterday to submit their offering price on the LTE frequency band that the government has put up for auction. [NEWS1]

The representatives from all three telecommunication companies - SK Telecom, KT and LG U+ - showed up at the Telecommunications Technology Association (TTA) office in Bundang, Gyeonggi, at 9 a.m.

But the frequency that the companies are most interested in is the bandwidth for 1.8 GHz.

This is because a recent report by the Global Mobile Suppliers Association showed that 43 percent of LTE service providers use this bandwidth. The 2.6 GHz came in second with 38 percent.

According to the Ministry of Science, ICT and Future Planning and industry sources, KT is aiming at getting its hands on 1.8 GHz, which would help boost its LTE service.

KT has expressed concerns that SK Telecom and LG U+ might collaborate to block KT from winning the auction for the 1.8 GHz bandwidth by raising the auction price ridiculously high.

“We are still concerned about a joint collaboration by the two competitors,” said Lee Seok-soo, a KT executive who appeared at the TTA office yesterday. “We hope that all three companies would take the frequency that they need at an appropriate price.”

The bid started with intense security as the Future Planning Ministry blocked the basement floor of the TTA, where the auction was held. The staff of the mobile carriers and MSIP officials were cut off from outside access.

In the auction, three people from each communications company, including one bidder and two assistants, were allowed to participate.

They determined the bid price by contacting the head office with two licensed mobile phones, one fax machine and one laptop computer.

The mobile phone and the fax machines can only be connected to a specified number approved by the ministry.

In the frequency auction, about five to six rounds are expected take place and the winning bidder of the frequency is to be determined sometime this month, industry sources say.

“As there are too many variables, we prepared the auction with a variety of scenarios. Only a very few within the company are aware of the main contents, such as the bid prices due to strategic security issues,” said a spokesman for a telecommunications company.