Kumgang a separate issue for Seoul

Kumgang a separate issue for Seoul 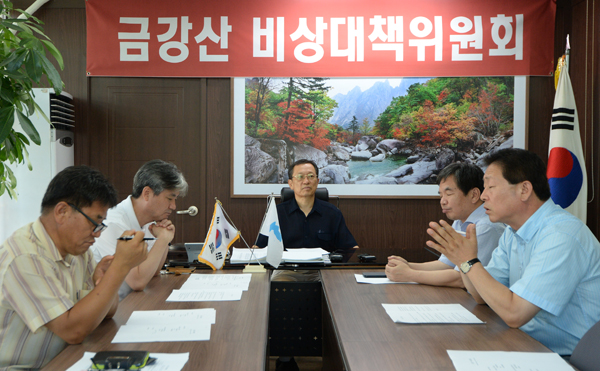 Businessmen with interests in the Mount Kumgang Resort hold an emergency meeting yesterday in Seoul. They issued a statement urging the South Korean government to accept the North’s proposal of talks on restarting the tours. [NEWSIS]

South Korea will deal with the matter of reopening the shuttered Mount Kumgang Resort separately from the two other current inter-Korean interactions of restarting the Kaesong Industrial Complex and organizing reunions for families separated by the 1950-53 Korean War, a high-ranking government official said yesterday.

The official reaffirmed that although the two Koreas recently agreed on reopening the Kaesong Industrial Complex, that doesn’t mean that they could jump directly into working on getting the Mount Kumgang Resort up and running again.

“Although the Kaesong park is a litmus test for inter-Korean relations and we found a resolution on that matter, that doesn’t mean the situation now becomes one where we resolve all of the problems and troubles,” the official said.

On Sunday, North Korea accepted Seoul’s proposal of Red Cross talks on the family reunions on Friday, but it wants the venue to be Mount Kumgang rather than the Peace House, which was proposed by the South and is located in the southern portion of the border village of Panmunjom.

Along with the family reunions, Pyongyang suggested working-level talks on Thursday on the Kumgang tours, which have been halted since July 2008.

Hours after the North’s counterproposal, South Korea responded through a press briefing that it still wants the meeting to happen at Peace House, not Mount Kumgang. Seoul refused to immediately respond to the matter of reopening Kumgang, saying it would review the issue.

The Mount Kumgang Resort, jointly-run by the North and South Korea’s Hyundai Asan, has been shuttered since a South Korean tourist was shot dead by a North Korean soldier in July 2008.

North Korea said the woman had entered a restricted military area, but refused Seoul’s request for an investigation. The regime also refused to offer a formal apology or to arrange measures to prevent a recurrence.

“The [Seoul] government has not changed its position in demanding that [Pyongyang] gives clear solutions and assurances that no such accident will happen again,” the official said. “After fully reviewing this matter, we will make an announcement on our position.”

As of press time, North Korea had not responded to Seoul’s sticking to Panmunjom for the reunion talks, and the South hadn’t given an answer on Kumgang.