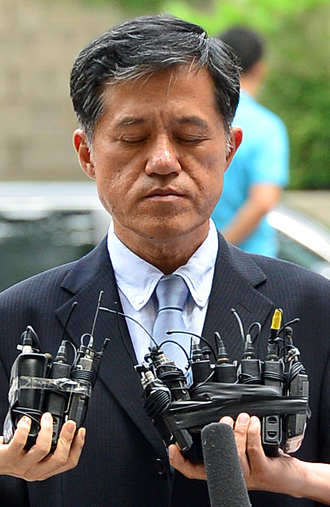 The brother-in-law of former President Chun Doo Hwan faced a warrant hearing yesterday as prosecutors try to detain and question him about his role in managing the suspected hidden assets of the Chun family.

As of press time yesterday, the court was still deliberating whether it will grant the warrant or not.

As a part of its investigation into the hidden wealth of the former military strongman, the Seoul Central District Prosecutors’ Office questioned Lee earlier this month. The prosecutors applied Wednesday to take Lee into custody on charges of tax evasion.

According to the prosecution, Lee is suspected of evading 13 billion won ($11.6 million) of capital gains tax when he sold properties in Osan, Gyeonggi, to a developer in 2006 for the price of 58.5 billion won.

The prosecution also said Lee sold another property in Osan to Chun’s second son Jae-yong in 2006 for the price of 2.8 billion won. The amount was one tenth the assessed value of the property. Two years later, Chun junior allegedly sold that land to a construction company and made a profit of 6 billion won. The prosecution suspects the deal was a way to evade gift tax on the land. The prosecutors suspect that the money Lee used to purchase the land in Osan actually came from the former president’s secret funds. They also believe at least 30 billion won Lee made by selling the land in Osan was returned to the Chun family.

While the prosecution sought a warrant to detain Lee for a tax evasion investigation, it appeared that they were trying to prove that Lee served as a manager of the Chun family’s hidden wealth. Lee Kyu-dong, Lee’s father and the father-in-law of the former president, was the money manager for the Chun family when he was alive.

If the court issues a warrant, Lee will become the first Chun relative to be detained as a part of the prosecution’s latest probe into the former president’s hidden assets. In June, the prosecution created a special team to go after the Chun family’s assets in order to collect the former strongman’s outstanding fine of 167.2 billion won.

Prosecutors raided Chun’s residence and other homes and offices of the Chun family, as well as their safe deposit boxes. Chun’s nephew was arrested last week after a raid but released after hours of interrogation.

Chun came to power in 1980 through a military coup and ruled the country until 1988. In 1997, the Supreme Court convicted him of accepting massive bribes and running slush funds during his presidency, ordering him to pay a fine of 220.5 billion won. He has resisted paying the remaining 167.2 billion won of the fine and the Assembly approved a special law earlier this month to allow the government to go after the assets of his family, if they were proven to originally come from Chun.