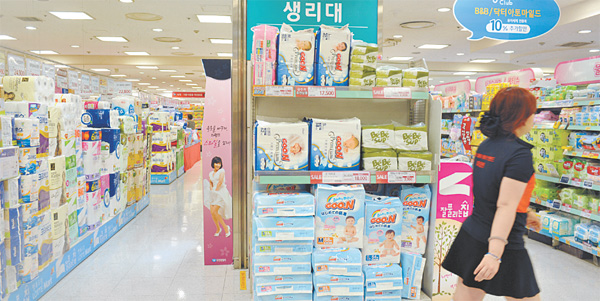 A pile of diapers from the Japanese brand Goon sitting on a shelf at Lotte Mart in Jamsil, southeastern Seoul, yesterday. By Lee Ho-jeong

It’s a Sunday night at the Noryangjin Fisheries Wholesale Market, dinnertime, but only a handful of customers roam brightly illuminated stalls. For although the market offers fish from many places - including the waters of Korea, of course - customers are afraid the catch is from Japan.

And if it is, they’re afraid it’s contaminated with radiation from the Fukushima Daiichi nuclear plant.

“Nowadays, people avoid eating raw fish here because they believe all the fish is contaminated with radioactive materials after rumors circulated around the Internet,” said a merchant at the market. “They even avoid Korean fish.”

The vendors are trying their best. When visits slumped as a result of recent rumors on the Internet, they slashed prices by 50 percent, to no avail. “Customers still think all the pollack and mackerel are from Japan,” said the merchant.

The news is magnified as it gets spread around on social networking services in Korea.

On top of the rumors, the Korean government’s ambiguous standards for imports of Japanese fish and agricultural products have fueled anxieties of consumers.

When a small amount of cesium is detected in agricultural and processed food?products, importers must submit a certificate that proves there are no other radioactive materials present such as plutonium.

Because it takes about two months to prepare the certificate and go through customs, importers of Japanese agricultural and processed food products usually give up on products with cesium.

But fish are a different matter. They can come in as long as the cesium level is under 100 becquerels.

This level of radioactive materials in Japanese fish worry consumers, particularly pregnant women and parents raising young children, despite the government’s claim the fish is safe if the cesium is under 100 becquerels.

But the amount is going up. Radioactive materials were detected in 159 tons of fish imported in the domestic market in 2011 and 2,705 tons of fish last year.

The MFDS says that because fish spoils easily, the loss to importers and exporters would be too big if the customs procedure were prolonged.

“It is realistically impossible to require additional examination,” said a spokesperson for MFDS. “That would mean stopping the fish trade with Japan and it would cause immediate problems.”

Consumer groups and environmental organizations said the ministry should apply the same standards on all foods imported from Japan.

“Rather than thinking about the interests of traders, the government should consider the public health first,” said a spokesman for Korea Federation for Environmental Movement.

Consumer phobia is spreading beyond fish to many other Japanese products.

“People have stopped eating saengtaetang,” said a restaurant owner in Sogong-dong, central Seoul. “Although we replaced the pollack from Hokkaido with Russian pollack, people still don’t trust the country of origin.”

Fresh pollack sales have really fallen off since consumers associate the frozen fish with Russian suppliers. In the first half of 2011, the sales ratio of frozen pollack and fresh pollack was 83.3 percent to 16.7 percent. This year, the proportion of fresh pollack fell to a mere 2.8 percent. Lotte Mart has even started importing pollack from Canada.

But many consumers are avoiding the fish entirely, just to be safe. The import volume of pollack at Noryangjin Fish Market has also decreased significantly, from 1,300 to 1,500 10-kilogram (22-pound) boxes in 2011, to 500 to 700 boxes last year, and 400 boxes in the first half of this year.

Other Japanese products are being shunned, too.

“I love chocolate and yesterday I grabbed some made by Lotte at a nearby discount store,” wrote a pregnant woman on one of the nation’s largest online communities for mothers, Momsholic (http://cafe.naver.com/imsanbu). “But while I was eating it I realized that the wrapper was in Japanese and with fear I looked at the package and saw that the product originated from Japan. With all the talk about radiation from Japan, it makes me really nervous.”

Another mother wrote that she called Orion Group’s consumer service center and asked if the raw chocolate used in its popular Choco Pie was imported from Japan.

A pregnant woman, who claimed she was infatuated with Japanese snacks, wrote that she told her husband that the Korean government has confirmed that goods imported from Japan go through strict inspections and are therefore safe. The husband replied: “If you keep that up, we might end up with a mutant baby like in the movie ‘X-Men.’”

Several mothers wrote that they have stopped using water purifiers from a Korean company since the filters were imported from Japan. Others said they decided not to purchase a 360-degree children’s toothbrush from Vivatec, a Japanese company.

A mother of a five-month-old toddler posted that she was concerned about a rash on her baby. “Could it be that the diaper was exposed to radiation?” the mother wrote.

Although Lotte Mart has not officially announced whether sales of the popular Japanese diaper Goon have gone up or down, it is currently selling the diapers at a 30 percent discount.