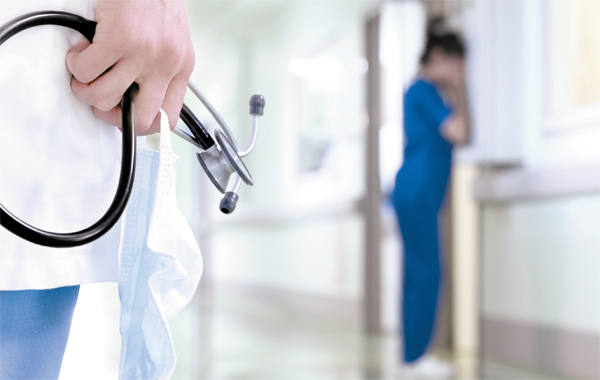 The diagnosis of a rare and incurable disease can change one’s life in many ways. In addition to fighting their illness, patients - or their families - must deal with arranging and receiving necessary treatments, medicines and hospitalizations. Last but not least, these diseases often inflict financial burdens that leave patients and their loved ones feeling overwhelmed.

A mother surnamed Oh, who works part time at a nursery facility in the mornings and as a housekeeper in the afternoons, knows these feelings well.

“I was finally pregnant with my son after trying for five years. After giving birth to him, I heard that he had a rare disease. It felt like there was no hope for me. When my son, who dreamed of becoming a pro wrestler, grumbled at me saying why I had given birth to him with an illness, my heart was torn,” said Oh, whose 16-year-old son suffers from phenylketonuria (PKU).

PKU is an inherited disease in which patients are otherwise healthy, except that their bodies cannot break down an amino acid called phenylalanine. Amino acids join together to build protein, a common nutrient found in food that all humans need to survive.

In Korea, fewer than 200 people suffer from the disease. PKU patients must follow a strict diet which limits phenylalanine. Their diet consists of a phenylalanine-free medical formula, plus a carefully measured amount of fruits, vegetables, bread, pasta and cereals. If they follow the diet, they can carry on with their regular daily lives. If they don’t, they can suffer physical or psychological disabilities. 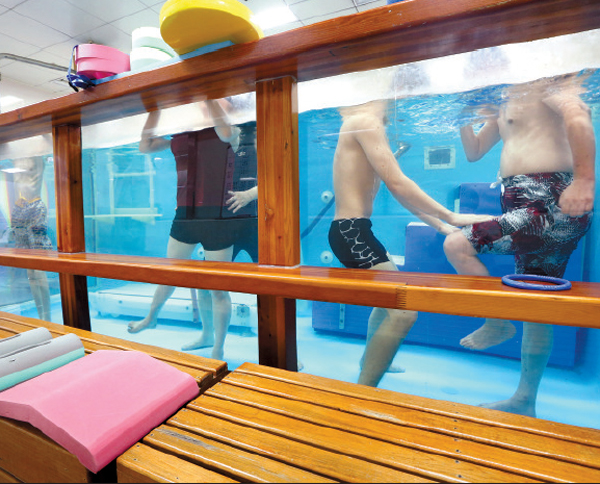 Shin Hyun-min, 59, a multiple sclerosis patient, receives hydrotherapy at the Ilsan Paik Hospital in Ilsan, Gyeonggi. Shin is the head of the Korean Organization for Rare Diseases. [JoongAng Ilbo]

However, the medical formula, which must become part of PKU patients’ daily life, is very expensive, Oh said.

Each month, she receives two cans of the formula (worth 220,000 won, or $196) and money for another medicine (400,000 won) that is mixed with a special hetbahn, a bowl of ready-to-eat microwaveable rice. However, when her son turns 18, this support will end.

Patients over 18 with rare and incurable diseases from households of lower-income brackets can continue to receive support, however, the number of beneficiaries is low. Lower-income households are those with an income of less than 300 percent of the country’s minimum cost of living. For example, the current minimum cost of living for a family of four is 1.55 million won a month. Therefore, a patient over 18 from a family of four with a total monthly income of less than 4.64 million won could continue to receive the treatment.

Oh makes about 1 million won per month. Oh’s husband, who works as a taxi driver, earns about the same amount. With about 2 million won as their monthly family income, Oh says their debts have been mounting for years.

“This disease is lifelong. I don’t know how we can finance all the additional costs along with his medical fees,” said Oh.

Jeong Hye-jin, head of the Families of PKU Patients said, “Government’s customized support will be really helpful for those patients who suffer from illnesses such as PKU as they can adjust well to society upon following a strict diet as its major treatment.”

In addition to medical expenses for regular treatments and hospitalizations, there are other costs that are not often covered by the country’s health insurance system, such as drugs and supplies for rare diseases as well as alternative food.

According to the Korea Centers for Disease Control and Prevention, there are 389 rare and incurable diseases in Korea. For a disease to be categorized as rare and incurable, there should be fewer than 20,000 people suffering from it, no proper medical treatment or development of alternative medicine, and no anticipation of recovery or improvement.

“Those patients with rare and incurable diseases that are not included in the ‘special payment’ suffer from great distress. There must be fundamental measures that surpass current laws and policies,” said Shin Hyun-min, head of the Korean Organization for Rare Diseases. Shin says there’s no centralized agency or organization that advocates for patients with rare and incurable diseases.

Currently, the Ministry of Health and Welfare decides whether a disease is rare or incurable, while insurance coverage decisions are made by the Health Insurance Review and Assessment Service, and disability rating reviews are handled by the National Pension Service.

Early this month, inside a hydrotherapy room at the Ilsan Paik Hospital in Ilsan, Gyeonggi, a loud, concise count of “one, two, one, two” resonated with the sound of splashes.

Inside an aquarium-like tank made out of transparent acrylic boards, a patient slowly moved his legs to the sound of his physical therapist’s count.

Next, the patient tried to stay afloat while his neck and arms were wrapped around a buoy.

The patient was Shin, 59, head of the Korean Organization for Rare Diseases, who suffers from multiple sclerosis, an inflammatory disease in which the insulating covers of nerve cells in the brain and spinal cord are damaged.

Such damage not only disrupts the ability to communicate and maintain balance but also causes paralysis in the arms and legs, disables the nerves that control the ability to urinate and defecate and causes body aches. Multiple sclerosis patients must receive regular physical therapies such as hydrotherapy to maintain their muscular and nerve strength.

Shin said the hydrotherapy and his regular physical therapy costs about 1.5 million won to 2 million won annually. Although there are physical therapists at welfare facilities for the disabled that are equipped with hydrotherapy pools, multiple sclerosis patients can’t use those facilities as their “disability rating is not high enough to use the facilities.” Shin stresses these examples are “only the smallest parts of so many problems that patients of rare and incurable diseases face every day.”

Shin says there are so many cases of families of patients with rare and incurable diseases who fall from the middle class, to poor, then destitute due to the financial burdens of medical expenses.

A father surnamed Huh of a 1-year-old daughter who suffers from congenital biliary atresia, a rare and incurable liver disease, said that although the ailment his daughter suffers from qualifies for the “special payment” benefit, the cost for other checkups and uninsured treatments are extremely high.

“My daughter needs to receive a liver scan once or twice a year, which is not insured. Even blood tests are not insured and getting them at general hospitals is extremely expensive,” said Huh, who said just one checkup visit with the doctor with one blood test for his daughter costs about 130,000 won. When he’s told to do scans and other tests before seeing the doctor, his “heart pounds on calculating what the figure on the bill would add up to.”

As Huh, who is a student doing missionary work, lives on Jeju Island, he must fly to Seoul to visit a large hospital, which often lacks insured rooms.

“There’s no good hospital in Jeju to treat such a severe disease like my daughter’s in Jeju, so we have no choice but to fly up to Seoul. Moreover, whenever my daughter has to be hospitalized, we look for a more than six-person room as rooms less than six are uninsured.

Huh said his daughter’s doctor told him that she may soon need a liver transplant, which will cost more than 50 million won. If Huh or his wife’s livers don’t match their daughter’s, then she’ll have to receive a liver donation, which costs more than 100 million, said Huh.

According to the Korean Network for Organ Sharing Center of the Korea Centers for Disease Control and Prevention, the average waiting time for a liver donation for a patient to receive a liver transplant is 165 days - and that can vary according to age, gender and blood type.

“The hospital checked my financial status, whether I own my own apartment or whether I live in jeonse, which is lump sum deposit rent. How much I earn a year and what my family does and all that. When they figured out that there’s no way that I can pay for my daughter’s treatments, they connected me to a social worker. I don’t know what’s going to happen,” said Huh.

For some, the development of a new drug for rare and incurable diseases could mean hope but at the same time, the possibility of debt or even despair.

However, about 2,000 multiple sclerosis patients in Korea still can’t get their hands on the pill as it’s not yet imported. The Health Insurance Review and Assessment Service and the Novartis Pharmaceuticals Corporation, the manufacturer, are squabbling over the price. Its international price is about 3 million won per month.

There are differences in how other developed countries deal with rare and incurable diseases. Leaving out England and Europe, which adopt public health insurance programs that require minimum medical charges from its patients, Korea and Japan are somewhat similar in terms of their health insurance systems.

“As a long-term goal, we will be pushing toward increasing the number of rare and incurable diseases so that more diseases can be insured up to 90 percent,” said an official from the Ministry of Health and Welfare.