Ryu comes up short as Dodgers fall to Miami

Ryu comes up short as Dodgers fall to Miami 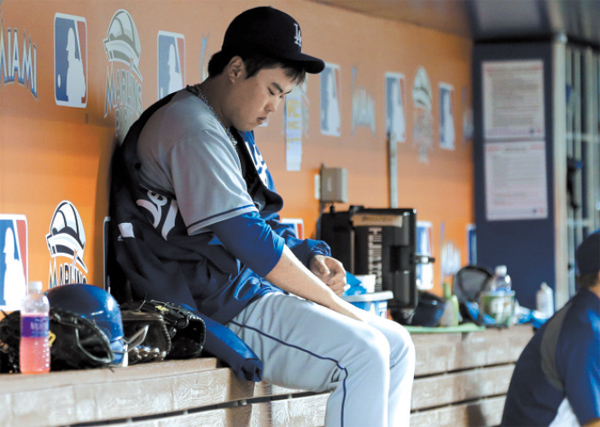 Ryu Hyun-jin sits after getting relieved in the eighth inning against the Miami Marlins on Monday. Ryu recorded his fourth loss of the season. [AP/NEWSIS]

MIAMI - The two NL Rookie of the Year contenders chatted on the field during batting practice, discussing how they escaped Cuba before becoming major-league stars this season.

Then they went head-to-head, and Jose Fernandez bested Yasiel Puig to beat the Los Angeles Dodgers.

Fernandez allowed only one earned run in six innings to help Marlins win 6-2 Monday night, giving the Dodgers consecutive defeats for the first time since June 20-21.

Puig went 0 for 3 against the All-Star right-hander in their first matchup.

“It’s not a big deal,” Fernandez said. “It’s one game. I don’t think at all that I’m better than him. His talent is no doubt.”

They met for the first time less than two hours before the game and talked at length, a rarity for a hitter and the pitcher he’s about to face.

“We were talking forever,” Fernandez said. “I know we’re going to be incredible friends, because we actually were talking about what we went through to get here. We used to live 45 minutes away from each other. Pretty amazing.”

The animated 21-year-old was especially pumped up to face the NL West leaders.

“He told me he was fired up and woke up at 6:30 in the morning ready to go,” manager Mike Redmond said. “I was a little nervous, just because with young kids you’re not sure.”

Fernandez lacked his usual command, walking two in the first inning, and threw 109 pitches. But he struck out eight, and the Dodgers went 0 for 7 against him with runners in scoring position.

“He’s a tremendous pitcher,” Puig said through a translator. “He knew how to mix his pitches and was able to dominate.”

Fernandez also had the Marlins’ first hit and scored the game’s first run from first base on a two-out double by Christian Yelich.

“We just beat the best team in baseball,” Fernandez said. “That’s the most important part. I could have pitched a lot better, but we got the win.”

Ryu Hyun-jin (12-4), another standout rookie, allowed three runs in 7 1-3 innings and lost for the first time in his past eight starts.

Logan Morrison doubled home a run in the seventh to put Miami ahead to stay. Giancarlo Stanton added his 15th homer in the eighth, when Miami scored three times against a bullpen that has been the best in the majors over the past month.

Three Marlins relievers completed the six-hitter, delighting a crowd of 27,127, the third-largest this season in Miami.

The Dodgers fell to 25-5 since the All-Star break and lost for only the third time in their past 22 road games. They had a 10-game winning streak snapped Sunday at Philadelphia.

“We didn’t play bad tonight,” manager Don Mattingly said. “We didn’t make any errors. We didn’t get a whole lot of hits. We just got beat. At some point you have to say you got beat.”

Juan Uribe went 3 for 3 against Fernandez, scored once and doubled home a run. But Puig went 0 for 5, dropping his average to .351.

Hanley Ramirez, traded by the Marlins during their miserable 2012 season, drew boos each time he batted. He went 0 for 4 and struck out twice.

Los Angeles loaded the bases in the fifth on a ground single, an infield single and an error by third baseman Ed Lucas. Carl Crawford drove in a run with a groundout, but Fernandez then squelched the threat. He struck out Puig on three consecutive 97-mph fastballs, and struck out Adrian Gonzalez on a breaking pitch.

“He has always taken those situations and really dominated them,” Redmond said.

Stanton homered off the home-run sculpture at Marlins Park against Chris Withrow. AP