Samsung’s Mega the next big thing

Samsung’s Mega the next big thing 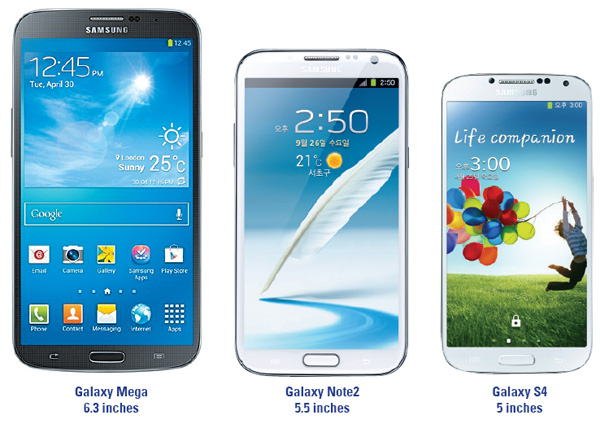 Smartphones are getting bigger as people use them more to watch movies and play games. A new one from Samsung is beyond big.

With a screen measuring 6.3 inches diagonally, the Galaxy Mega is almost as big as a 7-inch tablet computer. The difference: It makes phone calls.

Samsung says the Mega is a hybrid that combines the portability of a smartphone with the immersive experience that a tablet offers for movies, books, music and games. Phones of this size are typically referred to as phablets.

Samsung Electronics is known for big phones. Its flagship Galaxy S4 is 5 inches, while the Galaxy Note 2 is 5.5 inches. Apple’s iPhone 5 is 4 inches.

Samsung is also known for offering a variety of devices, with different screen sizes and prices, to target a range of consumers. Because of that, it’s now the leading maker of phones. Apple, by contrast, has been releasing one model a year that targets high-end consumers. A new iPhone is expected this fall.

The Mega includes many features available in other recent Galaxy phones. That includes Multi Window, which allows multitasking in a split screen, and Easy Mode, which reduces the number of features and choices for new smartphone users.

AT&T says it will start selling the Mega on Friday for $150 with a two-year service contract. The Mega is also coming to Sprint and U.S. Cellular. Dates and prices weren’t available for those carriers. The Mega made its debut in Europe and Russia in May, but hasn’t been available in the United States until now.

As Samsung’s phones get larger, at least one of HTC’s is getting smaller. AT&T announced Monday that it will start selling a smaller version of the HTC One.

Called the HTC One Mini, it will have a 4.3-inch screen, compared with 4.7 inches on the standard model. It’s also lighter, at 4.3 ounces. The One is 5 ounces. The One Mini will be about $100 cheaper than its big brother. It will be available starting Friday for $100 with a two-year service agreement. AP