Race for KBO postseason heats up

Race for KBO postseason heats up 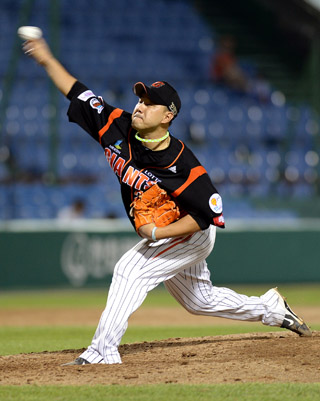 With the final postseason berth at stake, the race for fourth place in the Korea Baseball Organization is shaping up to be just as exciting as the race for first.

Song Seung-jun threw seven shutout innings, and the Lotte Giants blanked the Hanwha Eagles 4-0 in Daejeon on Tuesday, extending their winning streak to three games. That moved the Busan franchise within one-and-a-half games of the fourth-place Nexen Heroes.

The Giants snapped a six-game losing streak on Friday with a 9-3 victory over the Heroes, winning a game against the NC Dinos Saturday and drawing on another on Sunday.

“We will try to win as many games as we can this week by employing the top three starters in four games,” Giants manager Kim Si-jin said. “It shouldn’t be difficult considering the two-day break.”

After the Giants finish a three-game campaign against the Eagles today, it will have a two-game series at home with the Samsung Lions beginning Saturday.

The SK Wyverns are also gaining ground. They beat the Lions 8-4 on Tuesday, earning their fourth win in five games.

The 2012 Korean Series runner-ups credit their resurgence to pitching stability. The Wyverns’ team ERA is 2.86 in 19 games since the All-Star Game. Their offense has also improved, with Park Jung-kwon hitting .403 in the second half and Kim Kang-min hitting .328.

Wyverns’ manager Lee Man-soo is already eyeing the postseason, where he will bid to lead the team into its third consecutive Korean Series appearance.

“We need to have a good result after the [regular] season is over,” he said.

The LG Twins strengthened their bid to win their first regular season title in 19 years by nudging aside two-time defending champion Samsung Lions from their long-held first-place position, with a 5-3 win over the Heroes on Tuesday.