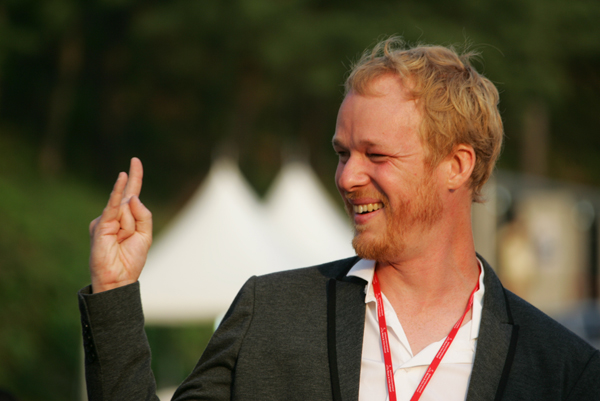 Martin Le Gall’ walking the red carpet on Aug. 14 at the Jecheon International Music and Film Festival, where his movie “Pop Redemption” opened the festival. The film will open widely in Korea in October. [NEWSIS]

Le Gall visited Korea last week to introduce his unlikely comedy about a death-metal band - The Dead MaKabes - who reach a make-or-break moment in their 15-year career when they get selected to play at a rock festival. The following interview is a translation of his answers from French, written by e-mail.

Q. How does it feel to have your film picked as the opening film for JIMFF?

A. To present my film to an audience abroad, who doesn’t speak French, is such a big honor for me. To transcend cultures, borders and meet with others and make a connection with a universal tale, these are themes touched upon in my movie, too. It’s my first time here so I’m very excited, and I was touched by the warm reception. I’d like to come back soon.

You’ve dabbled in short films, music videos and documentaries. But this is your feature film debut. How did it go?

It’s similar to being pregnant. It’s a world-shaking experience and very different from working on a short film. You question yourself and begin doubting even your past behavior.

Still, I was really lucky to be with the best team. I think filmmaking is a business venture and one person can’t make it alone. In that respect, it’s different from giving birth. I needed a lot of time and learned a lot during the process. My producers and I learned how to write a full-length feature scenario, to cast actors and other rules of the game.

What attracted you to this story?

I was flipping through “Eurostar” and came across an ad featuring Beatles’ look-alikes. Then I started envisioning that the imitation band members were there because they did something wrong and were on the run. The producers liked my idea and my cowriter Mark Eacersall and I started developing the story.

The band in the film is a black-metal group but the film is a comedy. The two seem like opposing genres. How did you manage to combine the two?

It wasn’t easy, but it wasn’t impossible either. In initial stages, all stories fall short. I like to mix two ideas that seem unlikely.

What is the message of your film?

My film has something for everyone in the family. Older folks will like the nostalgic reference to the Beatles, while young viewers will get the urge to go to a concert after watching the film.

How was the film received in France?

Unfortunately, despite the efforts of the distributor, it wasn’t a big success. Regrettably, the time at the cinema didn’t do the production period justice. It was a hard time for me.

But the film will be available on DVD, Blue-ray and VOD, so I think it’ll be a bigger success there. I also think it’ll do better in Korea than it did in France. I believe in Korean audiences.