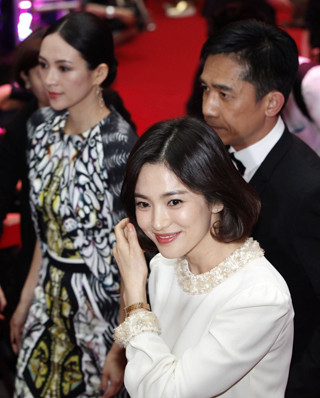 Cast members Tony Leung Chiu-wai (right), Zhang Ziyi (rear) and Song Hye-kyo at an event promoting “The Grandmaster,” which was the opening film of the Chinese Film Festival, in Seoul on June 16, 2013. [REUTERS]

BEVERLY HILLS, California - It was a black-and-white home movie of an old man, diminutive and cancer-stricken, performing Chinese martial arts techniques in a Hong Kong apartment that spurred director Wong Kar Wai to make his latest film, the Kung Fu epic “The Grandmaster.”

Wong, best known as an auteur of pensive and brooding urban dramas “Chungking Express” and “In the Mood for Love,” said he was deeply puzzled by the intentions behind the homemade film of Kung Fu master Ip Man, made days before his death in 1972.

“I keep asking myself why he wanted to do it and much later I realized that there’s a saying in Chinese martial arts that’s like ‘to keep the fire burning,’” Wong, 57, told Reuters.

“So what I think he intended to do is to do this: he wanted to preserve his technique so it can be shared and taught to future generations,” the director added.

“The Grandmaster,” in U.S. theaters on Friday, is Wong’s attempt at sharing that legacy, telling the story of Ip - the trainer of Kung Fu film icon Bruce Lee - as a man whose calling as one of China’s martial arts masters was taken from him by the upheaval of World War II.

Starring longtime Wong collaborator Tony Leung as Ip, the film is divided into three parts that span the Kung Fu master’s adulthood in 1930s southern China and his exile in Hong Kong following the Chinese revolution in 1949.

The story of Ip, who was born in Foshan, China, in 1893, has also experienced a revival in recent years with a 2008 biopic and a TV miniseries broadcast earlier this year in Hong Kong, China and other Asian countries.

But Wong said he wanted to differentiate his film, which was released in parts of Asia and Europe earlier this year, from others by conveying technical authenticity, specifically the Wing Chun style of Kung Fu.

Other Chinese martial arts in “The Grandmaster” include Baji and Xinjyi, each characterized by swift and powerful handwork.

What defines “The Grandmaster” are Wong’s trademark themes of frustrated love and exile, his plotless and episodic storytelling, and sumptuous cinematography by Philippe Le Sourd.

The film, Wong’s first attempt at a martial arts movie after 1994’s box-office flop “Ashes of Time,” also writes in a fictional love story between Ip and Gong Er, the daughter of a Kung Fu grandmaster played by Chinese actress Zhang Ziyi.

“It’s so physical and there’s an animal quality in it,” Wong said about the first sparring match between Ip and Gong, after which Gong pursues him by exchanging letters.

“During that part [the fight], it’s like two beautiful animals fighting each other. I think that tells a bit more about this relationship than just a normal romantic story,” he said.

Both of the characters are uprooted by the Japanese invasion of China, which began in 1937, and end up reuniting in Hong Kong as refugees in the 1950s, their families in China now dead.

“Gong Er is in a way a symbol of a time that he [Ip] wants to go back to. It’s almost like a lost paradise,” Wong said.

Their reunion in Hong Kong, to which Wong moved from Shanghai at age 5, punctuates the film’s legacy theme amid its masses of dislocated people.

“Hong Kong is a place for all these immigrants after the war,” Wong said. “They’re coming from all parts of China - north and south - and they come in all walks of life: businessmen, martial artists, intellectuals, politicians.”

Wong said he is able to feel this sense of exile handed down from past generations and how they struggled to adapt while also trying to preserve their former life.

“And this film, actually, we trace back even more to see what is the time before Hong Kong, where they came from, what is their life. And you can feel this sense of loss when you compare these two periods,” the director said.

Korean actress Song Hye-kyo also appears in the film as Ip’s wife Cheung Wing-sing. The film will be released in Korea today. Reuters