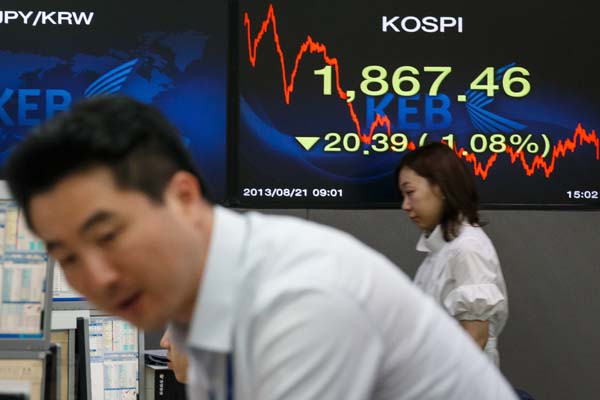 A electronic signboard at Korea Exchange Bank in central Seoul shows the Kospi down more than 1 percent ahead of the U.S. Federal Reserve’s release of minutes from its July meeting. The Korean stock market retreated for the past four trading days. [NEWS1]

The Seoul main bourse continued its bearish rally yesterday for the fourth consecutive day ahead of the U.S. Federal Reserve’s release of its July meeting minutes that may show whether it plans to taper its stimulus program.

Since Friday, the benchmark Kospi since has lost 56.45 points, more than 3 percent. It edged close to 1,860 yesterday, the lowest since July 16.

The Fed’s release of minutes was scheduled to occur after the Korea JoongAng Daily’s deadline.

The stock market’s bear rally wasn’t exclusive to Korea as many other markets across Asia were shaken up by fears the U.S. central bank will soon scale back its bond buying. 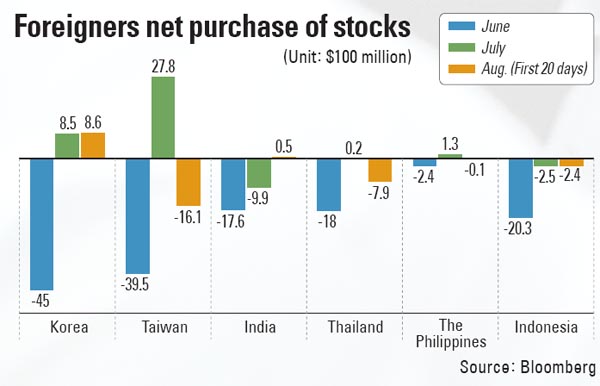 Indonesia, whose stock market has been plunging recently - including Tuesday’s 3.2 percent decline - rose 1.1 percent largely thanks to purchases made by the country’s biggest pension fund. It was the first increase in five days.

Indonesian shares have tumbled at the fastest pace in the world this quarter amid concern that the biggest inflation in four years will spur the central bank to tighten monetary policy further after it raised the benchmark interest rate in June and July. The index so far has fallen 20 percent from this year’s peak. The Asia-Pacific measure gained 1.7 percent this year through Tuesday, lagging behind a 16 percent surge in the S&P 500 as growth slows in China. Speculation that the U.S. Federal Reserve will curb bond buying has spurred investors to sell assets across Asia and in emerging markets. That left the MSCI Asia Pacific gauge trading Tuesday at 12.8 times estimated earnings compared with 15 for the S&P 500 and 13.8 for the Stoxx Europe 600 Index, according to data compiled by Bloomberg.

The effect of the U.S. Fed’s possible scaling back of its stimulus program first surfaced in May, when several members on the Federal Reserve Board hinted the U.S. economy was on a recovery course. Although Fed Chairman Ben Bernanke told a congressional hearing that the central bank needed to see that the recovery is sustainable before gradually reducing its stimulus program, many market observers believe such a move could come as soon as next month. 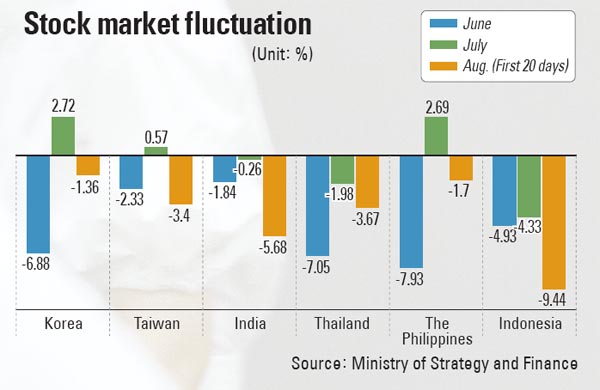 Hence, the minutes from the most recent meeting of the Fed are expected to have a huge impact on markets.

The June meeting minutes showed were mixed views among the Fed’s members on when the scaling back should begin. While some backed an aggressive timetable, others preferred a later date. The next Fed meeting is scheduled for Sept.17-18.

Currently, a significant drop in India’s currency value is affecting other emerging markets, including Indonesia and Thailand, and resurrecting the ghost of the 1990s financial crisis in Asia that also crippled Korea’s economy at the time. 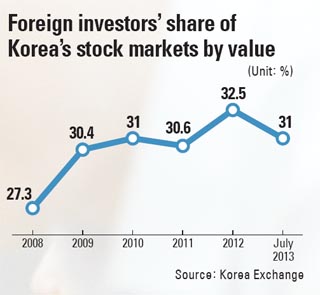 “As the value of several Southeast Asian currencies has been falling in the past couple of days, the late 1990s Asian financial crisis that started from Thailand is bringing back old fear and driving foreign investors out,” said Lee Sang-jae, an economist at Hyundai Securities.

Foreign investors dumped more than 145 billion won ($129.6 million) worth of stocks on the Kospi yesterday. This was a turnaround from net purchases over the previous six trading days.

“Investors are cautious and reducing exposure to emerging markets,” Marc Djandji, a partner at the Asean Strategy Group, said in Ho Chi Minh City. “Concerns about the Fed’s tapering are putting an additional strain on markets that have been dealing with their internal economic issues.”

Market experts and the government alike say the situation is unlikely have a huge impact on Korea’s economy, whose fundamentals are stronger than in other emerging countries.

“The countries that are considered to show signs of crisis have one thing in common,” said Shin Je-yoon, chairman of the Financial Services Commission. “They have been accumulating current account deficits and foreign investors are retreating not only from their stock markets but also the bond market. The situation in Korea is different as we have continuously posted current account surpluses while foreigners are continuously buying Korean stocks and bonds.”

The Korean economy, although lagging in economic growth since 2011, has been enjoying current account surpluses for the past 17 months.

While India’s rupee valuation fell 4.24 percent in the first 20 days of this month against the U.S. greenback and Indonesia’s rupiah tumbled 3.75 percent, Korea’s won slightly nudged up by 0.24 percent.

The stock market has also been stabilizing, with the Kospi slightly falling by 1.36 percent in the first 20 days of this month. India’s stock market has fallen 5.68 percent during the same period, while Indonesia’s market has recorded a sharper drop of more than 9 percent.

Even when compared to Taiwan’s 3.4 percent drop, the Kospi has been more stable.

Additionally, Korea has larger foreign reserves than other emerging markets and that could cushion the blow from a massive exodus of foreign investors. As of July 31, Korea’s foreign reserves were $330 billion. Although slightly smaller than Taiwan’s $409 billion, it is still larger than India’s $280 billion, Indonesia’s $93 billion and the Philippines’ $83 billion. Furthermore, Korea’s short-term debt to foreign reserves is only 37 percent.