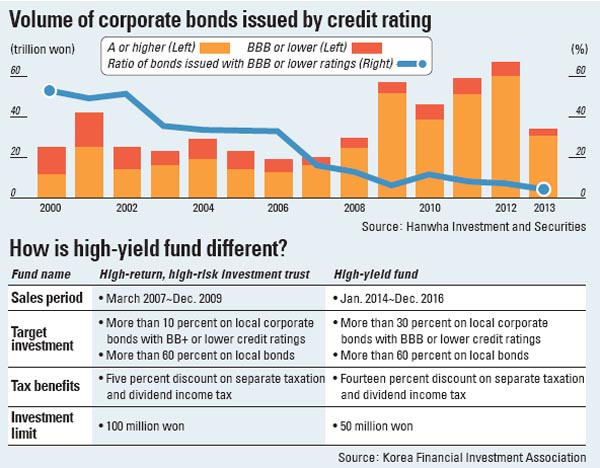 Controversy is rising over the government’s move to introduce high-yield fund products through asset management companies starting next year, as the target of the funds is mainly low credit-quality corporate bonds that could lead to consumer losses.

As part of efforts to normalize the frozen corporate bond market, the Financial Services Commission announced comprehensive measures last month that include offering retail investors separate tax benefits starting next year if they invest in high-yield funds consisting of more than 30 percent corporate bonds with BBB or lower credit ratings.

Financial products are often subject to separate taxation and are popular means to reduce the overall tax rate of high-income earners.

The government is introducing high-yield fund products to boost the country’s corporate bond market that has been listless due to financial market volatility. The move is in line with government efforts to maximize synergy with its measure to issue primary collateralized bond obligations (P-CBOs), a security credit product, to eventually acquire bonds of corporations struggling to raise capital.

“We expect [the high-yield funds] to help breathe some life into companies with B or lower credit ratings doing business in sectors like shipbuilding, shipping and construction,” said an official from the FSC.

What’s of concern, however, is that retail investors could be victims of the high-risk, high-yield funds. Experts note that the potential risk involved in a high-yield fund is higher than the tax benefits of the product.

According to LG Economic Research Institute, the default rate of companies with a BBB credit rating in the first half of this year reached 2.16 percent, up from 1.7 percent in the same period last year. The institute also noted that of those companies, 40 percent were in danger of not being able to pay back their debt.

Due to the risk involved, institutional investors like insurance and asset management companies have limited their investment in corporate bonds with A or lower credit ratings.

It isn’t the first time the government has come out with a measure introducing high-yield funds to normalize the corporate bond market. In 2007, it announced a high-return, high-risk trust fund. Though the target investment of the fund was corporate bonds with BB+ or lower credit rating - a lower rating target than the high-yield fund - only 10 percent of the target investment was those bonds.

Back then, asset management companies had to face strong complaints by retail investors because they saw losses, with many of the midsize companies going bankrupt.

“We were all surprised [by the government’s move] because even officials like us in the securities industry thought that kind of high-risk, high-return fund turned out to be a failure,” said an official from a brokerage firm.

There also are questions being raised over whether the policy move will help boost the local corporate bond market. Industry officials are concerned that asset management companies introducing high-yield fund products will discriminate when choosing investment targets.