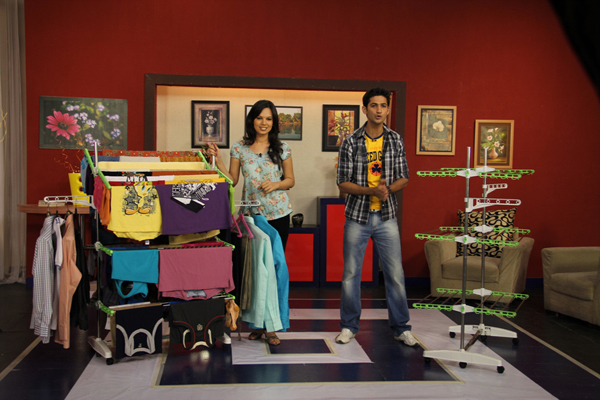 Hosts of Star CJ, a home-shopping channel launched in India by CJ O Shopping, hang out the washing to demonstrate the convenience of a drying rack. Provided by the company

Ten college students from Vietnam kept their eyes fixed on two show hosts talking about the comfort and style of new pants on the set of a studio of CJ O Shopping in Bangbae-dong, southern Seoul, last week.

The students seemed intrigued by how the hosts combined their sales pitch with music and video clips. “It is very interesting, as if I was watching a K-pop show,” said one student.

The students came to Korea to participate in a global internship program run by CJ Group. For three weeks, they learned how a home-shopping program is made as they toured the company’s studios, logistics center and products for sale.

“Like we went to Germany to learn how to build automobiles and to Japan to learn electronics in the past, they are coming to Korea to learn know-how about broadcasting home-shopping programs,” said an employee at CJ O Shopping.

Korean home-shopping channels have caught on abroad since using the so-called “shoppertainment” model.

Unlike foreign channels that have show hosts who repeatedly explain basic information about a particular product, Korean home-shopping programs have hosts who do role-plays about the products they are selling, as if they were actors or actresses.

If Korean hosts have to sell fry pans, a kitchen is created onstage and the hosts wear aprons. They demonstrate making fried eggs and talk about the pros and cons of the product.

Lotte Home Shopping is swamped with calls for tours from several organizations in 10 countries, including Vietnam, Thailand, Japan, France and the United States. Employees at Vietnamese state-run broadcaster VTC Group and Thailand’s CP Group have visited the company’s broadcasting center more than 50 times.

CJ O Shopping broadcasts on eight channels in six countries and plans to expand to Europe next year.

Hyundai Home Shopping entered China in 2011 and saw profit in the Chinese market double for the first six months of the year compared to the same period last year.

“If the current trend continues, one of Korea’s home-shopping companies can be the world’s No.1,” said Lee Hae-seon, CEO of CJ O Shopping.