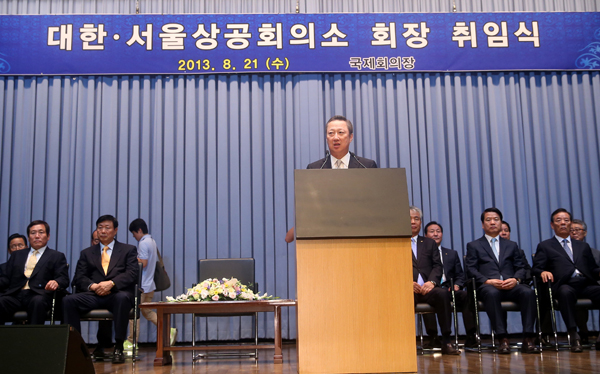 Doosan Group Chairman Park Yong-maan speaks yesterday at his inauguration at the Korea Chamber of Commerce and Industry in central Seoul. [NEWS1]

Doosan Chairman Park Yong-maan pledged to make an effort to serve as a bridge between businesses and political and social communities, and to resolve widespread anti-business sentiment, during his inauguration yesterday as chairman of the Korea Chamber of Commerce and Industry (KCCI).

As the country goes through sluggish economic growth and polarization, businesses are under increasing pressure to come up with a new framework of action and way of thinking, and the role of the top business lobby group getting bigger, he said at the press conference at the chamber office in central Seoul.

“Koreans tend to positively assess the success of local businesses, but at the same time the spirit against businesses is prevalent,” he said, adding that people denouncing the entire business community just because of the wrongdoings of some is “not desirable .?.?. I want to focus on raising the social status of businesspeople.”

To that end, the role of corporations is crucial, he continued. “There have been some wrongdoings that were excused in the name of spearheading rapid national economic growth but now the convention needs to be fixed. Management activities should be done within the boundary of trust.”

As the most impending business issue to resolve, he cited job creation and boosting the economy. “Revitalizing investment, the key to increasing job posts is not a matter of willingness but opportunity,” he said. “I hear a lot of businessmen saying they are willing to invest but haven’t found the appropriate investment destination.”

Park is renowned as an avid supporter of culture who enjoys communicating with people of different ages and backgrounds through Facebook and Twitter. He is third among Doosan’s founding family members, including his father, to head the chamber.

He succeeds Sohn Kyung-shik and will serve the remaining term of former chairman through March 2015.Sohn stepped down in the middle to fill the management vacuum at CJ Group caused by cochairman Lee Jay-hyun’s imprisonment on corruption and tax evasion charges. The KCCI chairman’s term may be extend by an additional three years.