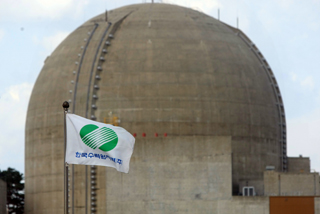 A 1 million kilowatt nuclear reactor abruptly stopped yesterday, rekindling the threat of possible power shortages, which the government believed was over for the summer.

The Hanbit-6 reactor in Yeonggwang, South Jeolla, was halted at 2:44 p.m. yesterday due to a pause in the operation of a cooling pump, said Korea Hydro and Nuclear Power, the state-run operator of nuclear power plants.

After the sudden stoppage, Korea Power Exchange issued a level 2 warning as the power reserves fell to 3.14 million kilowatts at 3:28 p.m.

The Ministry of Trade, Industry and Energy thought the country had narrowly overcome a power shortage that could have led to blackouts last week, thanks to an aggressive government effort to slash consumption at public buildings by turning off lights and air-conditioners.

The second week of August was predicted to be the hottest period of the summer, and the government was at its most vigilant. But the heat wave is now forecast to continue through this week, possibly until mid-September.

The ministry, which was in a celebratory mood, didn’t expect the shutdown of another nuclear reactor.

After the shutdown of Hanbit-6, a total of six nuclear reactors are out of operation. The country has 23 nuclear power plants with a total capacity of 20.71 million kilowatts.

“Power supply might run short for the time being, but the government will be able to handle it since the weather is expected to cool down this weekend,” said Yang Gwang-seok, a director at the Energy Ministry.

Meanwhile, a special committee on energy of the ruling Saenuri Party yesterday held a meeting with Vice Minister for Trade and Energy Han Jin-hyun to discuss measures to overhaul the nation’s electricity billing system and also address corruption and safety problems in the nuclear industry, to help stabilize supply and demand.

The lawmakers and vice minister agreed that rising fuel costs should automatically be calculated in electricity bills from this autumn. They also agreed to simplify the current six-phase progressive system of power rates for households into three phases.

“Although we overcame the power crunch in August thanks to cooperation from the people, replacing problematic parts in nuclear reactors is being delayed, so we might face another power shortage crisis in the winter,” said lawmaker Na Seong-lin.

Three reactors were shut down in June after it was found that faulty parts with fabricated quality certificates were used in them. Under the current billing system, households using more than 501 kilowatts per hour should pay 11.7 times higher the unit price (690.8 won/$0.62 per kWh) of electricity charged to households using less than 100 kilowatts. Their rate is 59.1 won per kWh.

The new system will reduce the six ranges to a possible three: a first phase for households using 200 kWh or less, a second for 201 to 600 kWh and a third for over 900 kWh. Since there is no need to amend the law for power rates, the new plan can be enforced from October if the ministry and Korea Electric Power Corporation reach an agreement.