Samsung calling out to all seniors

Samsung calling out to all seniors 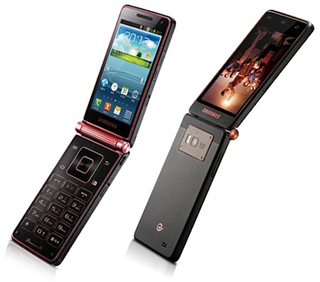 Samsung Electronics yesterday introduced a flip-type smartphone, the first of its kind in Korea, that aims to cater to an older generation that prefers basic phone features to complicated ones.

The hybrid device, running on Android’s latest Jelly Bean 4.2 operating system, looks like a conventional feature phone. But it is equipped with two Amoled (active-matrix organic light-emitting diode) 3.7-inch touch screens - one on the cover and the other inside - and a regular keypad.

Unlike conventional flip-type feature phones that only open to 180 degrees, the cover of the Golden can be rotated 360 degrees.

The Galaxy Golden is widely recognized as the “Seongryong phone,” named after the Korean pronunciation of famous Hong Kong actor Jackie Chan, who modeled for the hugely popular device in China late last year when Samsung chose the country to first release the product.

Whereas it has a price tag of up to 2 million won ($1,789) in China, the retail price in Korea has been set at 799,700 won, sold through SK Telecom and KT. The cost is 155,100 won cheaper than the Galaxy S4 LTE, which of course has superior, more complicated features.

“Galaxy Golden, which is armed with convenience and dignity, has reflected the needs of the elderly,” said a Samsung spokesman, adding that the world’s top smartphone producer plans to further boost its product lineup with devices targeting specific consumer demographics.

Users can simplify the home screen by choosing the “easy mode,” and the S health menu has a pedometer and weight-checking applications.

The phone also has a business card recognition system that saves a phone number, e-mail address and Web site from the card when it is photographed. The eight-megapixel camera is relatively inferior to the current industry norm of 13 megapixels, but the device supports fourth-generation long-term evolution (LTE) connectivity.

Samsung’s domestic rivals LG Electronics and Pantech do not offer a flip-type smartphone. LG’s Optimus LTE 3, unveiled in March and selling well ever since, has adopted a simplified mode that enables the user to choose a large keypad on the touch screen and removes all the app icons from the home screen.

In Japan, the Aquos hybrid phone from Sharp gathered attention last year, being a slide-type smartphone with a keypad.