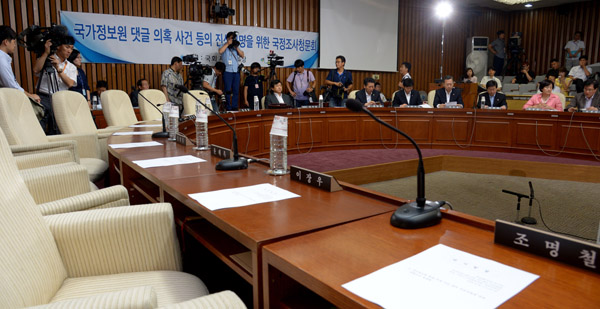 After Saenuri lawmakers boycotted a hearing at the probe into the NIS’s alleged interference in last year’s presidential election, opposition lawmakers gather to denounce the ruling party’s conduct during the investigation. [NEWSIS]

After spending nearly 50 days on a probe into the spy agency’s alleged interference in last year’s presidential election, lawmakers have failed to unearth any new revelations.

Instead, hearings deteriorated into political dogfights, leaving the public to wonder about the point of the National Assembly probe in the first place.

After the ruling Saenuri and main opposition Democratic Party agreed to a special probe to “learn the truth behind the alleged National Intelligence Service online campaign,” a special bipartisan committee launched the investigation July 2.

The idea was to look into allegations that were not investigated during a prosecutors’ probe into the same allegations. Earlier this year, prosecutors investigated claims that the National Intelligence Service ran an online smear campaign to sway public opinion against the DP candidate Moon Jae-in. They indicted Won Sei-hoon, who headed the spy agency at the time of the December presidential election.

The lawmakers’ investigation is scheduled to wrap up tomorrow, with no progress having been made as of yesterday and the ruling and opposition parties still at each other’s throats.

The third - and final - hearing was scheduled to take place yesterday morning, but Saenuri lawmakers did not participate in the session, saying they hadn’t attended as there were no witnesses scheduled to testify.

Lawmakers from the Democratic Party and Unified Progressive Party came to the meeting and roundly condemned the Saenuri Party’s lack of cooperation. They blamed the ruling party for the probe’s lack of progress.

When the lawmakers agreed earlier this month to push the original Aug. 15 deadline for finishing the probe back to this Friday, they also agreed to schedule a final hearing yesterday to call any additional witnesses. While the Democrats demanded that Representative Kim Moo-sung and Korea’s Ambassador to China, Kwon Young-se, appear, the Saenuri Party rejected the request. The two political heavyweights were top managers of the election campaign of then-Saenuri candidate Park Geun-hye.

The Democratic Party has failed to introduce any new evidence that the National Intelligence Service actually interfered in the December presidential election. Most of the former and current NIS officials who testified before the lawmakers claimed that their online operation was targeted at deterring pro-North Korea activities in cyberspace, not turning people against the DP candidate.

The Saenuri Party was criticized for defending the witnesses rather than interrogating them and for insulting DP lawmakers.

The National Assembly probe is also limited in its power because it has no legal right to punish perjury or to pressure witnesses to cooperate.

Won and Kim Yong-pan, ex-chief of the Seoul Metropolitan Police Agency - finally appeared at a hearing on Sunday, but they refused to take the oath or to testify. They simply denied all accusations against them.

The special investigating committee is scheduled to put out a report on their findings tomorrow, but it remains to be seen if the parties will be able to agree on the report.

Yesterday, the Democrats demanded a further investigation by an independent council, saying that the parliamentary probe has failed because they could not question key witnesses such as Kim and Kwon.

The Saenuri Party said the DP must end the political arguments, stop street protests and return to the Assembly.

“As the floor leader of the ruling party, I am issuing a stern message to the Democrats,” said Representative Choi Kyung-hwan.

“If the DP insists on the absurd demand and disagrees with normalizing operations at the legislature, the Saenuri Party has no choice but to open the session without them. Their demand for an independent council is an overt display of their intention to paralyze the Park administration and eventually reverse the result of the presidential election.”

Since Korea’s National Assembly revived the special probe system in 1987, a total of 21 lawmaker investigations have taken place, but they often fail to get anywhere.

Only seven probes have ended with their final reports even being approved.