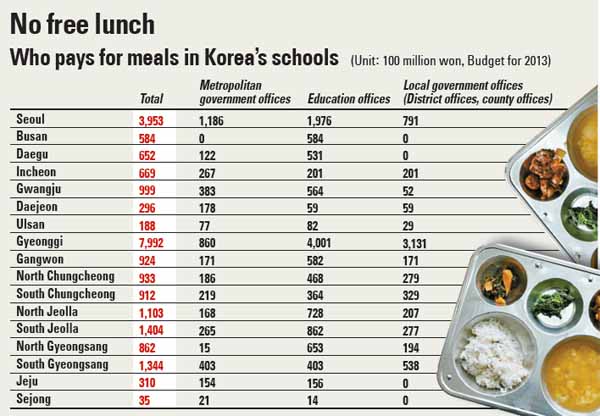 It looks like welfare will be the biggest issue in next year’s local elections.

The ruling and opposition parties are already trying to position themselves as public skepticism of their previous support for “welfare for all” grows.

The public has caught on that taxes will have to be raised if Korea goes down that road, and it seems to be calling for the politicians to put the policy at least partly in reverse.

Two years ago, a movement for free school lunches made expanding welfare the most popular campaign promise. Oh Se-hoon, a reelected Seoul mayor from the ruling Saenuri Party, was forced to step down only 13 months into his second term after he opposed free school lunches and called a referendum in August 2011 to see if the citizens agreed with him. They didn’t.

Park Won-soon won the post in the city’s first mayoral by-election in October with a pledge to expand the free school lunch program. Oh’s signature campaign to make Seoul a cooler, “designed” city gave way to a mania for welfare spending.

As of now, the free school lunch program covers all elementary school students and the first two grades of middle schools.

While the city government will continue its free lunch program, it still suffers a different budget crisis involving welfare.

On January 1, the National Assembly approved a budget bill for free daycare for kids. Under the plan, day care will be provided for families with children up to five years old. The new law doubled the number of children the Seoul city government needs to look after to 210,000 children.

The city said it doesn’t have at least 370.8 billion won of the budget for the program. The central government pays 20 percent, while the city pays the rest. Since Aug. 13, the city government has been broadcasting ads and putting up posters in buses and subways urging a drastic change in the plan.

“President Park!” the broadcasts say. “You said the central government should be responsible for a nationwide project such as the free child care program. Please keep this promise.”

Park refused to create a supplementary budget for the day care program.

The city government said it supports a revision to the law so that the central government will pay at least 40 percent of the day care budget.

“The Seoul city government is blaming the president and the National Assembly for its crisis in free childcare through wrongful advertisements,” said Representative Kim Hyun-sook of the Saenuri Party in a statement Tuesday. “Is Seoul Mayor Park blinded to anything but his reelection?”

The debate surrounding free school lunches is heating up outside of Seoul. Gyeonggi Governor Kim Moon-soo, a prominent Saenuri Party figure, scrapped the province’s budget for next year’s school lunches, saying it was killing the provincial budget.

Gyeonggi spent 86 billion won of the 799.2 billion won required to feed all kindergartners and elementary, middle and high school students in the province.

“If the governor has the intention to create a confrontation,” said Representative Kim, “between those supporting welfare for all and others supporting selective welfare for the needy to win the support of the conservatives for the sake of his own political career, he made a wrong move.”

The two-time governor of Gyeonggi is known for having presidential ambitions. Representative Kim, who served as both finance and education minister, is considered a strong opposition Democratic Party contender to run in the June elections for the Gyeonggi governor position.

More and more local governments are saying they can’t afford the free school lunch programs. Incheon and South Gyeongsang decided to give up their plans to expand the programs next year, as did Daegu and North Gyeongsang.

Before last December’s presidential election, both ruling and opposition parties competed to present wider welfare pledges to satisfy the public. But the public is now wary of the greater taxes that such promises are bound to bring about.

The Park government tried to end certain tax credits this month to pay for more welfare spending but had to amend the plan after a very negative public reaction.

After the recent tax hike controversy, more lawmakers in the Saenuri Party argue that the conservative ruling party must change its approach to support only selective welfare for the truly needy.

“If we admit the amount of the money required for free child care and ask the nation if it supports the plan for everyone, public opinion will be that we must go for a welfare program for the needy people,” said Saenuri Representative Shim Jae-chul, a ranking member of the Supreme Council.

Another Saenuri official said the party can’t change course yet because the Blue House said a wider welfare program without increasing tax is possible.

“The reality is clear that we have to revise welfare projects that will be implemented in the future,” he said, “although there is nothing we can do about those that are already being implemented.”

“It’s a topic through which the ruling and opposition parties can differentiate themselves,” said Lee Chung-hee, professor of political science at the Hankook University of Foreign Studies. “And at the same time, it is something that the people feel very strongly about. So it is a very significant topic ahead of the local elections.”

Another analyst said the Democrats will have the advantage in the debate.

“Because the Democrats are the opposition, they are freer from responsibility in policies,” said Lim Sung-ho, a professor of political science at Kyung Hee University.

“The Saenuri Party still needs to promote wider welfare programs before the elections, but it also needs to take into account the reality of paying for them. So the situation will be tough for the ruling party.”