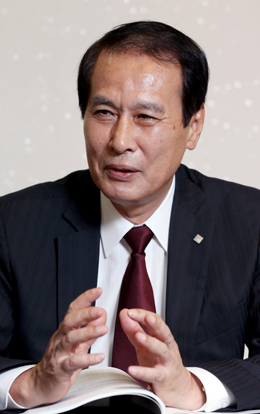 The president of Waseda University and chairperson of the Japan Association of Law Schools has warned Korea not to repeat the mistakes that his country’s law schools have made.

“Japan’s law schools have come under fire and are now considered a failure 10 years after the system was introduced,” Kaoru Kamata said in an interview with the JoongAng Ilbo.

“Last year, Korea saw its first batch of law school graduates. I am here in Korea to learn and to share our experience so that the system is implemented effectively,” he said.

He attended a joint symposium on Tuesday where faculty members from both Korean and Japanese law schools discussed ways to revamp the law school system.

Other panelists include Shin Hyun-yoon, president of the Korean Association of Law Schools and dean of the Yonsei University Law School, and Junichi Matsushita, a law professor at Tokyo University.

Since the system was introduced in 2004, Japanese law school enrollment has been steadily declining. The first year garnered some 72,000 applicants to 68 schools but the number of applicants has since plunged to 13,000.

“Too many graduates have been churned out but not enough jobs are waiting for them. So many perceive legal job prospects as being not as good as they used to be,” said Kamata.

“What’s worse, the bar passage rate averages at about 25 percent. These are factors that turn many away from law school,” he said.

During the discussion session, Dean Shin pointed out that things are not much different in Korea.

“Here in Korea, many law school graduates struggle to find a proper job,” Shin said, but “there was a controversy when the government recruited lawyers for level seven civil servant positions,” he said, meaning that they were upset about being offered relatively low-level jobs. “If you don’t like the offer, you don’t have to take it.”

He emphasized a flexible approach toward potential new legal markets. “Legal professionals should adjust to new circumstances. They should keep themselves away from a sense of entitlement,” he said.

They also discussed the adoption of a lawyer certification exam for non-law school graduates.

“I’m against the idea of such an examination because it might be another version of the National Bar Examination,” Shin said, implying such a test might trigger fierce competition.

“I think Korean law schools have a bounty of scholarships and other forms of assistance,” the professor said. “So the Korean government should take a careful approach to such an examination,” he said.

Although the law school system has problems, Professor Matsushita said the solution is not just to ditch it.

“The law school system faces different kinds of problems but returning to the old system is certainly not the answer,” he said.